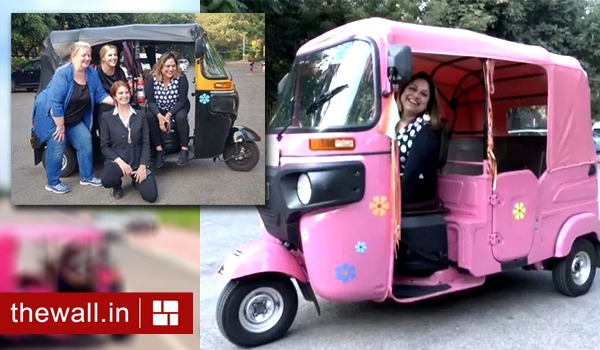 The Wall Bureau: Auto Rickshaw is running on the busy streets of Delhi. However, not the traditional yellow-green, but those autos with a mixture of pink and black are bound to catch anyone’s eye. The drivers of the autos, it should be said that they are all women, are not Indians at all. The 4 women inside the ‘special’ auto are high profile US Women Diplomats!

Four US diplomats Ann L Mason, Ruth Homberg, Sharin J Kitterman and Jennifer Bywaters have come to India. Apart from office work, the vehicle of four VVIPs in Delhi is now this pink-black auto. Leaving the bullet proof car allocated for them, 4 people are now plowing the streets of the capital in Amjanta’s auto. Adventure and public relations are happening, they are becoming a new example to the society with him.

Ann says her love for cars is eternal. Be it Detroit or Delhi, wherever he goes, he does not forget to ride new vehicles. Ann visited Pakistan before coming to India. While going there in a bulletproof car, I saw the glittering autorickshaw on the road and wanted to ride it. But there was no chance. ‘Then came to India and did not miss that opportunity, bought an auto,’ said Ann.

“Before this, I only drove automatic cars. Has clutch, never had any driving experience. As a result, driving an auto was very scary at first,’ claims Anne.

But why suddenly thought of doing such a strange thing? Anne replied, ‘My mother is my inspiration. He traveled all over the world, mother also participated in the Vietnam War. Mother and life have always taught me to never miss a new experience. Not only me, my daughter is also learning to drive an autorickshaw now.’ His personal auto is equipped with Bluetooth device. A picture of a tiger is painted on the screen of the car. He also named his car. Anne named her auto KITT after being inspired by the eighties TV show ‘Knight Riders’.

Sharin was born in Karnataka. However, he is currently a US citizen. Earlier, Sharin heard about the ambassador of Mexico, Melba Priya. He also had an autorickshaw in India, in which Melba used to go to office. After hearing about her, Sharin came to India and saw Ann. By the way, he bought the auto and arranged it in his own way. Decorated with tassels and flowers, the flags of India and America are placed on both sides of his car.

According to Ruth, diplomacy for him is about dealing with ordinary people. So every day Ruth goes to the local market on her way home from office by auto. ‘I know all the traders in my area. They were also very happy to see me driving an auto. They themselves come and talk to me. This is how I interact with new people every day, I get to know about their lifestyle. I consider the relationships I build with people like this to be a very important part of diplomacy,’ said Ruth.

For Jennifer, driving an auto is synonymous with ‘out of the box’ thinking. ‘I came to Delhi and talked to Anne. After getting into his auto, I decide, I need an auto too. By doing this, I get a chance to mix with common people, I get their human qualities. Many people helped me when I started driving autos. I have had the opportunity to see the human side of the people of Delhi,’ said Jennifer. At first there was a problem when driving in a crowd of other cars, bicycles, bikes, but now everything has become a habit, claims Jennifer.

In all, four VVIP foreigners are now roaming the streets of the capital in private autos.