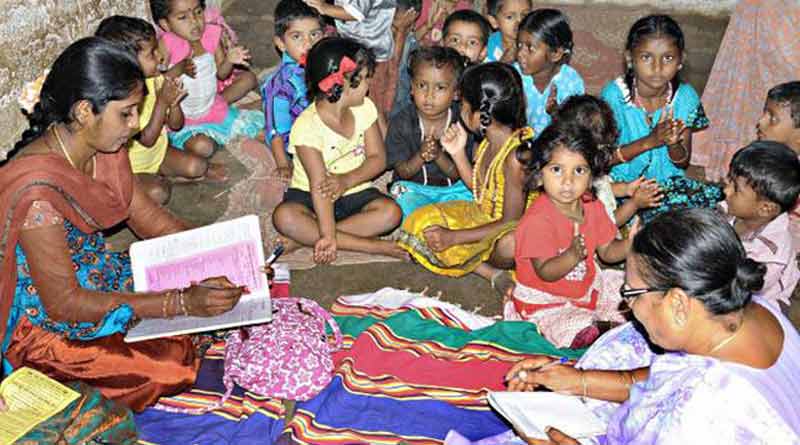 Babul Haque, Maldah: Anganwadi worker himself. The center is run at home. There are husbands, children, old parents at home. And in that full world, the young people of the neighborhood come to the Anganwadi center. The problem is not only in the toilet, but from cooking to reading, just about anything. There is only one toilet for family members in the house. When children get bathroom, they have to run to their own house or to the neighborhood’s bamboo garden, sugarcane garden. So where is the safety of children? Children may get bitten by snakes and insects while doing toilet work in the bamboo garden. Someone may be missing or kidnapped.

Not one or two, more than 50 percent Anganwadi centers in Maldah district are running in the homes of workers or helpers. Some centers are running in schools. This is the same picture from Kaliachak to Chanchol, Harishchandrapur, Gajol, Habibpur, Bamangola, Ratua, Manikchak, even Englishbazar block. Integrated Child Development Scheme (ICDS) Malda District Project Officer Ajay Barua said, “There are 5,723 Anganwadi Centers or ICDS centers in this district. More than 50 percent of them do not have their own house or house. The number will be at least three thousand. I have taken new responsibility in this district. Now construction of new houses of 40 centers is going on. None of the centers have electricity. In fact, Anganwadi centers do not require electricity.”

Why not build ICDS center? According to officials of the concerned department, no panchayat gives land for this work. No one donates land. All the government land in the village has been taken over by the land mafia. The land affairs department does not take initiative to recover that special land. As a result, children’s alayas or Anganwadi centers have not yet been established in villages. Somewhere in someone’s balcony, somewhere under the open sky, this center is running. An official of the Integrated Child Development Project in Malda expressed deep regret about this disorganization. There are also allegations of gross corruption in the construction work where the new building of the center is being constructed.

Kashimpur Anganwadi center of the area in Jagadala village panchayat of Bamangola block of Malda. A children’s shelter was built here in 2018. Allegedly, the roof of the house is falling after four years. A house at the center was built at a cost of about 10 lakhs from two funds of MGNRGS. Locals complain, why is the house built with so much money collapsing after four years?

The opposition alleges that there are at least 3,000 Anganwadi centers in Malda that are standing in the way of child development. Lack of minimum infrastructure. Most of the Anganwadi Centers in the district do not have very essential and basic infrastructure like water, toilets, electricity. As a result, it is alleged that the issue of child development is being hindered step by step. BJP leader Amlan Bhaduri said, “Unless this shaky state of infrastructure is rectified, the desired result will not be achieved at all. Center’s rice, potatoes go to Trinamooli’s house.” CPM district secretary Ambar Mitra said, “There is no infrastructure. No security. Children’s health is adversely affected. Children cannot be protected from disease outbreaks.”