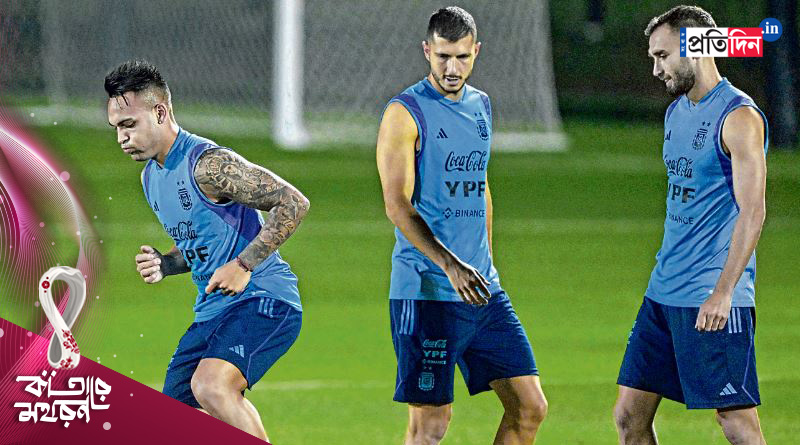 Dulal De, Doha: On the first day of practice, the controversy started around Lionel Messi. Argentina’s captain did not come to the press in practice. But he is not alone. Angel Di Maria didn’t come to practice in front of reporters.

While other teams have made luxury five-star hotels their strongholds for the World Cup, Argentina have camped out at Qatar University for the next month. Where there is no way to swallow a fly without the permission of the Argentine camp.

If you think about the sports infrastructure of our universities, you will be totally wrong. Just think how good the infrastructure of Qatar University is, a world champion team like Argentina can stay in its hostel for their World Cup campaign.
I saw in Brazil, Messira camped in a village away from the locality. At Brunetsi on the river in Russia. And here too they have camped themselves in such a place, without getting permission from the main gate, there is no way to go to the practice ground. If there is permission, take the main gate in front of KC Das shop at Dharmatala junction. And Messi’s practice is in the Mohun Bagan field. Since the invitation to journalists to watch the practice was from the Argentina camp (Argentina), the bus was parked in front of the main gate.

The first practice of the potential champion team ahead of the World Cup. The Argentinian press was in full disarray with cameras on the sidelines of Qatar University. Scaloni, Dybala came to the field one by one. But where is he? Lionel Messi?

At the back of the field, the footballers are entering the field one by one around the goal post. The big camera is pointed at the goal post. Perhaps he will come down. But in the end, Messi did not come. Di’Maria didn’t come either. But why didn’t the Argentine captain come to the announced practice in front of the journalists? Two interpretations are emerging through the Argentine media. There is no story about Di’Maria not showing up to practice. Because he still has a slight injury, Coach Scaloni sent him to the gym without practicing with the ball. Many people in the Argentinian media say that Di’Maria and Messi did not come to the field that day and practiced in the gym. Many people say that since there is a controversy about the sudden exclusion of Joaquin Correa from the Argentina team, Messi did not come to practice in front of the journalists that day.

Despite making the World Cup squad, Nico Gonzales was left out due to injury. Gonzales suffered a hamstring injury in practice the day before. But why leave out Joaquin Correa? Many people see Messi’s hand behind Joaquin Correa! Even though Sampaoli was the coach of the team last season, Leomel Messi was actually running the team.

Even if Scaloni is the same coach this time, Argentina coach is not in a position to throw away Messi’s opinion. For that reason, the press conference was also skipped from the Argentina camp. Lest there be any question about Joaquin Correa’s omission. Thiago Almada and Anhel Correa have been taken in place of these two. Both have left Argentina for Qatar. Meanwhile, Angel Correa was also in the Argentina team that won the Copa America.

Scaloni’s team is undefeated in 35 consecutive matches since 2019. Like the fans, the experts have started to think that the Argentina captain will not disappoint his fans around the world in the last World Cup. But Messi is taking all the pressure off Brazil and France. And that’s why they didn’t get up to a five-star hotel to prepare themselves behind the scenes and made the University of Qatar a fortress?

Many people say that the whole team came to Qatar University for the love of ‘Asodo’. Actually ‘asodo’ is a very traditional dish of Argentina. Argentinian footballers eat beef charred like barbecue. This time beef barbecue is not available in five star hotels in Qatar. Therefore, Argentina has established a base in Qatar University with 900 kg of meat from Argentina and a first-class chef. Because, ‘Asodo’ needs a lot of open space. Argentinian journalists were saying, everyone in Messi’s team is in love with this ‘Asodo’.

So Scaloni went to Qatar University instead of staying in a five-star hotel to keep the footballers happy.