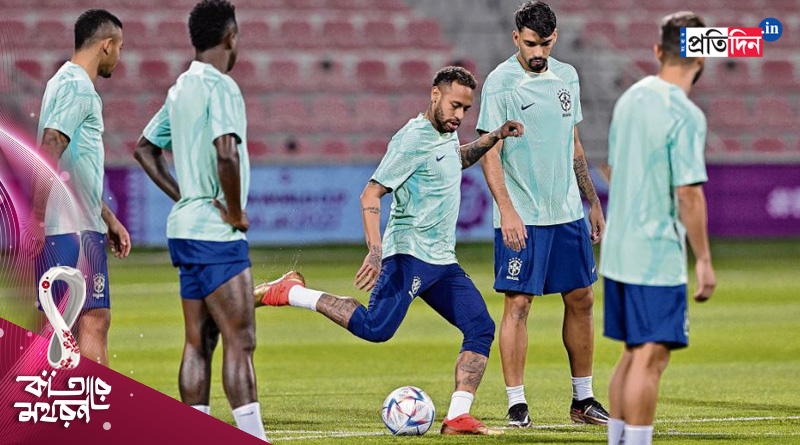 Dulal De: At the press conference, a journalist asked the question ‘what should I do or not’ and finally did it. Coaches usually don’t like to talk about teams other than the opposition before a match. But the Brazilian (Brazil) coach is a little different. Always has a smile on his face. “He’s like our father,” Richarlison explains. Great relationship with everyone. Always create a great atmosphere in the dressing room.” As a result, when an Argentine journalist threw the question at the traditional press conference before the match of Serbia (Brazil vs Serbia), Tite laughed. It was asked – Brazil will be careful after losing the first match of the strong enemy Argentina?

He answered that the question was raised in the press conference. Otherwise, Neymar has already been alerted by Messi’s condition. Tite said, “Of course. Argentina is a big name. Always respect Argentinian football. I respect the football of all such countries. No one is big or small as an opponent. Argentina’s loss certainly highlighted the problem. But the fans can trust us, we won’t let them down.”

At the beginning of the World Cup (Qatar World Cup), the entire world football was shaken by Messi’s unusual defeat. For Messi to lose to Saudi, anything can happen to any team on any given day. And after watching Japan’s game against Germany today, it seems that everything is uncertain in this World Cup. And that’s why Brazil is cautious before entering the field on Thursday. Neymar even went to the streets of Tuktak!

During the qualifying round of the World Cup, a barber named Yurzinho came to the Brazil Hotel holding Rodrigo’s hand. Neymar played great in that match with his hair cut. Rodrigo even scored. Since then, Jurjinho has been called to the Brazil camp several times. From what was known from Brazilian journalists, Nemar is ready to do everything to get this World Cup. Rodrigo has been told to fly Jurzinho out of Brazil as a matter of urgency. Neymar’s wish So Jurjinho arrived at the Brazil camp in Doha yesterday. And on this day, Neymar, Vinicius Junior, Rodrigo got a new hair style. Neymar, Vinicius Jr. will sport brand new hairstyles against Serbia.

But just what Tuktak? And a Globo journalist said, “Nemar is like that. Don’t look too serious. He does not understand what is going on in his mind. Brazil rarely talks to journalists these days. However, everyone is in a good mood during Titer’s coaching. Our coach does not allow any pressure to build on the team.
Coach Tite accompanied Serbia match captain Thiago Silva to a press conference in the afternoon at the main media center. And after the press conference, he ran to practice. Practice on this day means very normal practice before the game. Seeing what no one can understand, Brazil will jump into a formation against Serbia. 38-year-old Thiago Silva is the captain of the team. Dani Alves is the most experienced footballer in the team.

It was seen in practice that day, at the beginning, he was talking for a long time with his hand on Neymar’s shoulder. He also spoke about Neymar in the press conference before going to the field. In the 2014 World Cup, he could not play the match against Germany in his own country due to injury. Neymar is also out of the field with a back injury. And then that damned 1-7 loss. On this day, Thiago Silva was saying, “Nema left out of the 2014 World Cup due to injury. In 2018, he came back from injury to play the World Cup semi-fit. And now Nemar is fully recovered from injuries. Now Neymar will be seen in a different role.

It is not known whether the captain of the team was saying these words in private with Neymar on the side of the field in the evening practice. However, Neymar was seen having fun with everyone in the team in a good-natured manner. Neymar does not want to understand that he is also under the same pressure in Messi’s defeat. Both Thiago Silva and Tite raised the issue of pressure. Thiago Silva used to say, “At 38, there is no more pressure. I think I am going through the best moment of my football career. And our team is great. Everyone trusts everyone. respect That’s the kind of environment we want to play well.” And Tite said, “Look, Brazilian football has a tradition. Even after losing to Belgium in the previous World Cup, I am the coach this time. But I don’t see it as pressure.”

While Tite and Thiago Silva are holding a press conference, the Germany-Japan match has just started. “We can see what’s going on in every game,” Tite said when the topic of Argentina came up. Japan, of course, had not beaten Germany when he said this. And in the evening, when the footballers were released after a light practice, Neymar came to know that Germany had to lose to a small team after Argentina. As a result, the burden of protecting the honor of the traditional teams of world football is now at his feet. But after seeing the result of the Japan match after Saudi, Serbia coach Dragan Stojkovic is sitting in shock again. Said, “Although Brazil deserves to be world champion, we are not afraid anymore.” That is, nothing more will happen with the name. Smaller teams are no longer looking to lose before relegation. That is the pressure for Neymar today.