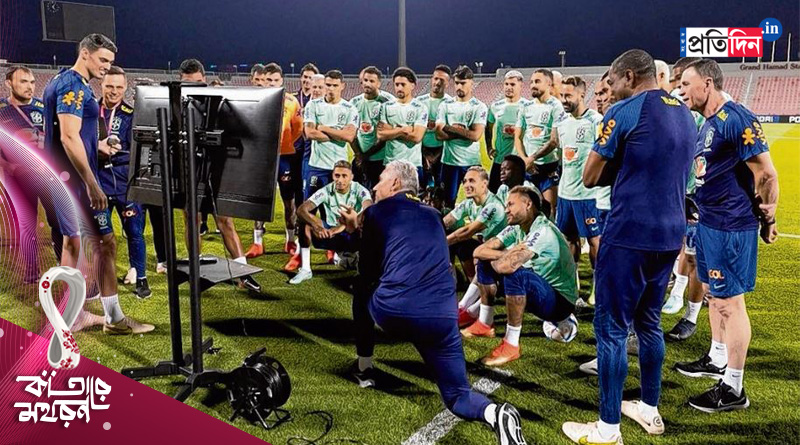 Dulal De: The Brazil camp has become more cautious after seeing the loss of Argentina (Argentina vs Saudi Arabia) to Saudi Arabia, a relatively weak opponent in the World Cup (Qatar World Cup). The Khullamkhulla practice was going on in front of the media till Monday. But that day Tite also closed the door to watch his practice. The purpose is the same. The coach of Brazil does not want to make it public which eleven will be fielded against Serbia on Thursday. On Tuesday, all the footballers, including coach Tite, watched Argentina’s match against Saudi Arabia on the team hotel’s TV. As soon as the match ended, the Brazil coach went out with the players for practice at Al Arabi Sports Complex. And there is a closed door practice with strict security.

Neymar has already changed his place in the first eleven for Vinicius. Neymar will play behind the strikers in the World Cup. Vinicius from the left wing. However, Brazil coach did not give any indication about what will be the final team. Even Oglobo journalists could not enter the practice for an hour that day. Later, however, Globo journalist Edmar told someone in Portuguese on the mobile phone that Vinicius Jr. is in the first team in the practice that he is doing today. Fred in reserve. Dani Alvez is also in the reserve team.

Neymar was wearing red beef on the jersey in practice that day. And the reserve team is in green jersey. A semi-clear photo has surfaced on Edmar’s WhatsApp outside the Brazil camp. It can be seen that Vinicius Jr. is standing from the left in the first team. The picture shows the red beef standing – Casemero, Alex Sandro, Thiago Silva and Marquinhos. Which means they are all in the first team. Gabriel Jesus and Anthony are seen in green jerseys. I mean, they are in the reserve team. After that, what Edmar said after investigating, Brazil’s first eleven against Serbia is going to be like this: Gole-Alisson. In defence-Danilo, Thiago Silva, Marquinhos and Alex Sandro. Midfield – Casemiro, Lucas Paqueta and Rafinha. Three in attack – Vinicius Junior, Neymar and Richarlison.

After an hour of practice, the team’s media manager, Greg, asked everyone to speak to Tite. The ever smiling Tite did not agree to that proposal. He said that he will say what to say about the Serbia match at the official press conference on Wednesday. Not before that. However, in the meantime, it was learned by the journalists of Globo, ’94’s hero Romario sent a message to encourage Neymar. After Argentina’s defeat today, the pressure on Neymar has increased. This time Neymar can keep a cool head and focus on the match, so Romario’s message. Did he send a message to Neymar, until ninety-three, who also had to endure a lot of criticism. Finally succeeded in ’94. At this time, focus should be on the game without listening to any criticism. It can be said that the message of winning the World Cup will make Neymar more excited.