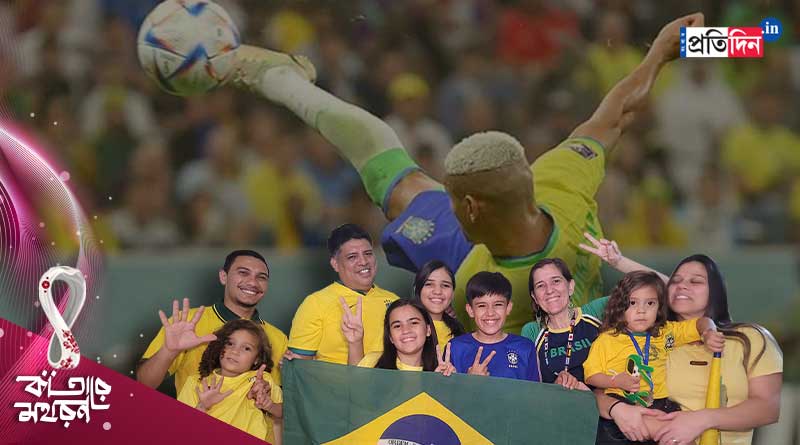 Krishanu Majumder: The clock was around two. Night has fallen in the city of Kolkata. But when you see them, who will say it’s late at night!
‘A piece of Brazil’ on the outskirts of Kolkata is bubbling with excitement. The festival is going on. Richarlison had just scored the magic goal at the Lusail Stadium in Doha. The fascination of that goal has spread to that flat in Narendrapur.
That goal did not end even on Friday afternoon. Home manager Eddie Carvalho said in clear Bengali, “The goal scored by Richarlison is the best goal of the World Cup.” Serbia is a very strong team. We won 2-0. We are very happy.”

Peler’s country is speaking in clean Bengali? Many may be surprised to read so much. What happens! Eddie and his wife Daisy are Brazilian but Indian at heart. Can speak multiple Indian languages. Eddy knows Bengali, has learned Hindi too. Now studying Sanskrit in Jadavpur University. When this reporter expressed surprise after hearing his words, Eddie said with a smile, “I know Hindi, Bengali well.” Now doing Diploma in Sanskrit. Sanskrit is very difficult, also the oldest language. And many Indian languages ​​are derived from Sanskrit.” Eddie’s surprise here!
Eddie is a resident of Porto Velho, Brazil. His wife Daisy is also from Rio. In Brazil, two people look after, get married. In 2006, Eddie and Daisy moved to Kolkata from Brazil with the dream of opening a football school. Kolkata is the city of football. And Eddie is football-mad. He wants to be a coach. That is why they are in the ‘mecca of football’. Since then it has been coming and going. Eddie and his wife started living in Kolkata again in 2019.
Former Brazilian footballer Douglas da Silva, Jose Ramirez Barreto are their close friends. Before setting foot in this city, they have heard about Kolkata’s love for football. In that context, Eddie was saying, “We have heard about football in Kolkata. I heard it was played in a full stadium. Staying in Kolkata but still haven’t been to the stadium during the derby. But I know derby madness. How many people are involved in the derby! Everything reminds me of Brazil.”
In the Qatar World Cup (Qatar World Cup 2022), Brazil passed by getting letter marks in the first match. Richarlison’s goals are being practiced. Speaking about the hero of the Serbia-match, Eddy said, “Ricerlison (pronounced Richarlison by Brazilians) scored one of the best goals of the World Cup. The injury occurred a month before the start of the World Cup. It’s unthinkable to come back after that injury and score goals in the World Cup.”
Eddie’s friend Iago, wife Andrea and two daughters Joao and Estevene have moved from Fortaleza, Brazil. Eddie and Daisy have one son and two daughters. The son’s name is Marcus Vinicius. Eddie’s favorite footballer is Vinicius Jr. Eddie’s wife Daisy said, “Marcus was chosen by his father Eddie. And I like Vinicius. Together, the son’s name is Marcus Vinicius.”
Vinicius stormed down the wing, Richarlison scored twice. The Brazil defense was not tested much. Edira is very happy with the overall performance of Tit’s team. Crowds gathered at their house since Thursday night. Friends stayed up all night watching the game together. On this day Eddie was saying, “You can say the day is great for me. Brazil won yesterday. My birthday is today 25th. My wife’s birthday was the 23rd and Iago’s wife Andrea’s birthday was the 21st.” Eddie’s wife Daisy has multiples. Skilled in handicrafts, also skilled in party decorations. “Brazil-Brazil,” says Daisy, wishing Tit’s team well for the upcoming matches.
Birthday wishes have been pouring in for Eddie since Thursday night. Along with the victory of Brazil. What is meant by ‘double bonanza’! Eddie, a fan of Vinicius Jr., says, “On Thursday night around 12:00, my friends came to my flat. I cut the cake. I saw the game. Friend Iago’s wife, Andrea, made Brazilian bread. Dip bread in coffee. I also enjoyed a great match.”
AD will sit for diploma exam in Sanskrit in January. Will fly to Brazil with the test. He is doing a football coaching course there. Along with this, graduation in physical training is also going on. His dream is to become a full-time football coach. Eddie says, “I will eventually get into football coaching. “Football is the life of Brazilians.”
Football is the only thing that keeps a nation from childhood to old age.