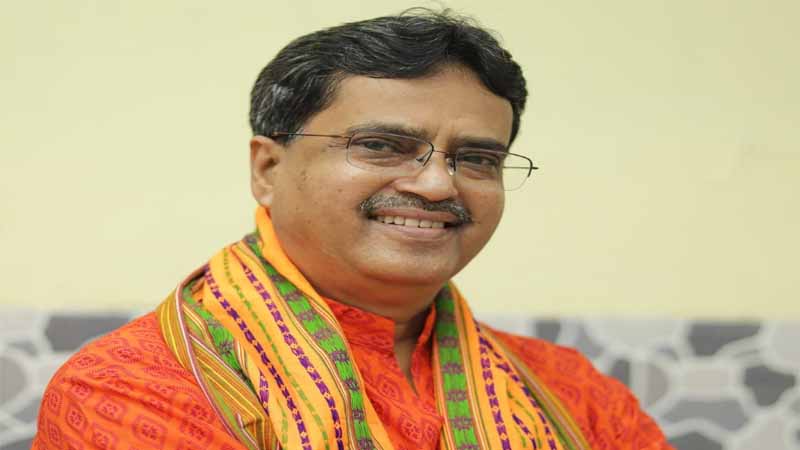 Own Correspondent, Charilam, November 24 The chief minister of the area inaugurated several newly constructed buildings and projects in Kamalasagar and Golaghati assembly under Vishalgarh subdivision throughout the day on Thursday. The aim of the present government is to deliver government facilities to the last person of the society The government is working towards that goal On Thursday, Chief Minister Dr. Manik Saha inaugurated the newly constructed Dr. Shyamaprasad Mukherjee Agri Market Shed and Stall at Gokulnagar in Kamalasagar Assembly at 11 am. The chief minister said that these stalls and shed houses have been constructed for the convenience of the people of the area and to increase the income of the unemployed youth.
The Chief Minister toured the stalls with the guests present and handed over the keys of the stalls to the stall recipient. After that he inaugurated the newly constructed paved building of Madhupur Primary Health Center funded by the State Government. Apart from Chief Minister Dr. Manik Saha, Chairperson of Sipahizla Zilla Parishad Supriya Das Dutta, Secretary of Health and Family Welfare Department Debashish Basu, Director of Department Radha Debvarma, Sipahizla District Governor Vishwashree B were present on the occasion. Tripura Medical College Chairman Dr. Prematosh Roy, Vishalgarh Panchayat Samiti Chairperson Chanda Debvarma, prominent social workers Gaurang Bhowmik, Subir Chowdhury, District Chief Health Officer Dr. Ranjan Biswas etc. Madhupur village panchayat chief Ratan Sarkar presided over the event
The Chief Minister said that the government is working very seriously to improve the quality of health services. Poor people are getting medical services through Ayushman card. The government has given importance to the development of hospital infrastructure in the state The current government has provided all the facilities including operation theater, blood bank in sub divisional level hospitals As a result, the general public is benefiting. After that Chief Minister Dr. Manik Saha inaugurated the newly constructed building of Konabon West Higher Secondary School. About seventy three lakh rupees were spent on the construction of the two storied house Apart from the Chief Minister, Zilla Parishad Chairman, Tea Development Corporation Chairman Santosh Saha, Education Department Secretary Sharadindu Chakraborty, prominent social worker Rajeev Bhattacharya, local village chief Rupali Dutta, District Education Officer Habul Lodh and others were present in the event. Inaugurating the two-storied building, Chief Minister Dr. Manik Saha said that the present government is working with emphasis on education and health system. The development of education and health services is very necessary for the development of a country. The state government has emphasized on quality education It is not allowed to be educated only in religious education Work should be done to awaken the sense of patriotism among the current students. In the said ceremony, the Chief Minister and other guests handed over land plots to the families of some landless tea workers of Kamalasagar. Moreover, loan approval letters were handed over to the women of various self-help groups. Rajiv Bhattacharya, a prominent social worker, said on the said occasion that this is the first time that the labor families working in tea gardens have got the right to land. The BJP government has reached the last person in the society
Once upon a time there was a so called Garib Dardi Sramik Dardi government But this tea did nothing for the workers Chairman of Tea Development Corporation Santosh Saha said that the socio-economic status of tea workers has improved The wages of the workers have increased. This government is determined to improve the social condition of the tea workers The Chief Minister’s last function on Thursday was the auspicious inauguration of Post Harvest Management Center and Rural Collection Center at Golaghati Gram Panchayat. Chief Minister Dr. Post Harvest Management Center and Rural Collection Center at Golaghati Village Panchayat was inaugurated by Manik Saha and Minister of Agriculture Pranjit Singh Roy. MLA Birendra Kishore Debvarma, Zilla Parishad Chairperson Supriya Das Dutta, Secretary of Agriculture Department Apoorba Roy, District Magistrate Vishwashree were present in the inauguration ceremony. B, Horticulture Department Director Dr. Foni Bhushan Jamatia, Samaj Sevak Gaurang Bhowmik, Panchayat Samiti Chairperson Chanda Debvarma, District Agriculture Department Director Krishnendu Saha. Farmers who cannot take their produce to the market and sell it without getting the right price can store their produce in air-conditioned Rural Collection Centres. About twenty five lakh rupees have been spent on it On the occasion, the Chief Minister said that this government will run the government with your advice. That’s why ‘Amar Sarkar’ portal has been launched The government has reached the people’s court Lakhs of people in the state have benefited from door-to-door good governance programs
For two years we had to fight with the corona virus Prime Minister Narendra Modi ji has saved us by providing food and vaccines during the corona epidemic situation Tripura has earned a reputation for fighting Covid The government is working more seriously in the field of health, agriculture and education The chief guest of the program, Agriculture Minister Pranajit Singh Roy said that the government has doubled the income of farmers in these four and a half years Agricultural products of the state are being sold in foreign markets 6000 is being paid annually under the Krishan Samman Nidhi scheme This is the first time the government is buying paddy from farmers at subsidized rates The government is providing seed fertilizer agricultural machinery KCC loans are being given at low interest rates The Agriculture Minister said that the government is working for the overall welfare of all the citizens of the state But this development of people is not tolerated by many The present government has extended all the facilities to the people through the Good Governance Day programme Finally, the guests distributed the agricultural machinery to the farmers of Golagathi assembly area to facilitate their agricultural work Certificates are also awarded to candidates applying for SC, ST, OBC, certificates.