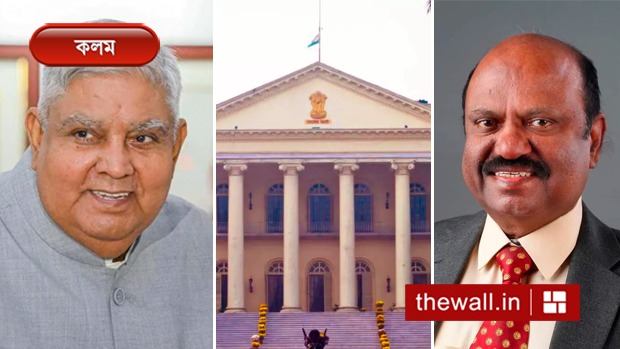 And after a while Governor CV Ananda Bose will take charge as the permanent governor of the state. There has already been a lot of discussion in the media about this retired bureaucrat of the central government.

After announcing his name through the Rashtrapati Bhavan press release last Friday evening, I had the opportunity to speak to Governor CV Ananda Bose on the phone that night. In the first interview he has to ask some questions that one would not normally ask before taking responsibility. Yet it had to be done, because Anand Bose’s predecessor, Jagdeep Dhankar, had raised these questions through his actions. Also, the journalists who spoke to Anand Bose, all tried to find out and understand, will he step into the shoes of a rich man?

I asked him this question directly that night. He said in response to this question like many questions, ‘Complaints are complaints. After taking charge, I have to understand the situation first.’ That is, Anand Bose did not clarify his position.

Not even supposed to. Because, no matter what objections one might have about Jagdeep Dhankar, this former bureaucrat knows that Narendra Modi, Amit Shah, JP Nadda considered him the ‘people’s governor’.

It is difficult to say whether the decision to make the ‘People’s Governor’ of Bengal the Vice-President was as much a relief as an honor for Dhankar. As the Governor of Bengal he was like a fluent talking mechanical puppet. There is no opportunity for the Vice President to open his mouth except during the Rajya Sabha. It can be assumed that he has coped with the impact of falling rhythm so far.

Also, Pulkit must have felt that how the governors of ABJP states like Bengal have rushed to follow him. Naturally, the curiosity is, after entering the Raj Bhavan today, will Anand Bose step into the shoes of Dhankar? In my opinion, the chances of that happening are eighteen out of sixteen.

Because, the main reason behind Dhankar’s elevation to the post of Vice President over the rest, he created the Modi-Shah-Nadda model of Governor CV Ananda Bose. That is, the parallel administration of the government is established. Knowing this syllabus or assignment, whatever, Bose took the flight from Delhi to Calcutta.

Governors have been pet parrots, salaried servants of the central government since a few years after the Constitution came into force. At one time, the governors, under the orders of the lords of Delhi, formed and dissolved the government here and there. The collapse of elected state governments using Article 356 of the Constitution was once a normal occurrence in politics. Out of the 136 times the Article has been misused so far, 98 have been done while the Congress was in Delhi. Hence the application of the term ‘chakarbakar’ of Delhi to governors is not new.

Therefore, even in the BJP era, they will be reduced if they are only considered as obedient servants. During the Narendra Modi-Amit Shah era, they have largely assumed the role of para army commandants in the state ruled by the AJP party. These governors are now not just the commanders of the Centre, but the fighting warriors of Delhi.

Otherwise, the Governor would not have rushed to Dhankar University to rescue the besieged Union Minister who was being surrounded by students as the rude, so-called ‘neighbourhood grandfather’. As if he is the police, he is the mayor. If the Governor and Acharya had kept in mind the constitutional status and etiquette, he would not have stood on the campus and threatened to remove the Vice-Chancellor from his post.

If the history of state-to-state conflict is written, the longest chapter will probably be the Bengali episode of the conflict. However, in the past, no governor in this state bothered to summon bureaucrats-officers to the Raj Bhavan and issue orders. Matenani is addicted to parallel administration. He did not warn the officers by tweeting word for word, did not dare to condemn the state government. On closer examination, it will be seen that in most cases, Dhankar has tried to discredit the state government on the issues that the BJP leaders have complained to him about. As a result, it can be debated whether Dhankarke came at all to perform the duties of the Governor of Bengal or was a permanent representative of the central team sent to Delhi. Now it is known that as a member of such a central team, Anand Bose, who is going to sit in the Governor’s chair, visited the state last year to find information about the post-poll violence given by the BJP.

The constitution says that the governor has to act on the advice of the state government. For example, civil servants are paid subordinates of the government. Therefore, no one is obliged to accept illegal, immoral instructions, decisions, suggestions. Neither are the governors.

Anand Bose clearly told ‘The Wall’ that day, ‘There will be a conflict of interest (state government vs governor). There can be conflict while working in a democracy. Sometimes it becomes inevitable. I don’t see anything to be upset about conflict, disagreement.’

This is 100% true. There may be conflict. Gopalkrishna Gandhi was made the Governor of Bengal by the Left Front government. He protested the firing of the police on the land agitators in Nandigram and gave a press statement calling the whole incident an act of terror. It can be said that there is no such precedent of protest from the palace of Bengal. But he too did not call reporters to the Raj Bhavan and denounce the government in front of TV cameras.

As a result, if Dhankar wanted to, he could have learned from the actions of his predecessors to follow the etiquettes of the government. But he did not walk that way, because the lords of Delhi must have told him to avoid that way.

In fact, due to multiple judgments of the Supreme Court, the idiocy of throwing out the government of dislike has now stopped. BJP therefore took a different path. Then, a parallel administrative system was established by displacing successively elected state governments from Raj Bhavan. The message is clear, not behind the veil, the servitude of the center must be done openly.

The governors of Telangana, Tamil Nadu, Kerala, Jharkhand have gone to war with the people of the state by blocking the public interest bills passed by the assembly in the same way shown by Dhankar. Nana Achilaya is calling the journalists and bashing the state government, as Dhankar used to do. The Governor of Kerala is ordering the resignation of vice-chancellors with 24 hours’ notice to assert his authority as acharya. After the court issued a stay on that order, the angry governor questioned how the vice-chancellors dared to disobey the Acharya’s orders and went to the High Court. Raj Bhavan handed over the show-cause letter to the Vice-Chancellors.

The Governor of Kerala even crossed all constitutional limits by writing to the Chief Minister recommending the sacking of ministers critical of him. A press conference is now held at the Raj Bhavan in Thiruvananthapuram to debunk the government. Even last week, the governor of Kerala, in the guise of a politician, even threatened to throw journalists out of Raj Bhavan who asked unsolicited questions.

Many believe that Mamata Banerjee’s worries about the Governor have been allayed by Dhankar’s departure from Bengal and the Trinamool’s abstinence from the Trinamool vote in the election for his vice-presidential post. This perception has been further entrenched as he and his party have maintained exceptional silence about the new governor.

But I think there is little hope of disrupting the role that the current rulers at the Center want to see the governors play. Anand Bose is a bureaucratic man. Dhankar was a lawyer. It is therefore natural for two people to differ in their working style, but their intentions are less likely to differ.

One thing needs to be said, a ‘dumb-black’ governor is not desirable at all. Considering the ongoing politics of West Bengal, corruption, lawlessness, political violence in the administration, an active governor is desirable. As a result, conflict is inevitable. Even if the fight is limited to the constitution, it is good. Stepping into a rich man’s shoes will lead to quarrels.

And if it turns out that all the fears are proved false and Mamata Banerjee’s government is enjoying its days with Governor CV Ananda Bose, then the five may try to find reasons, figures, equations, which may not be pleasant for the Trinamool. People can say, ‘Dal Name Kuch Kala!’