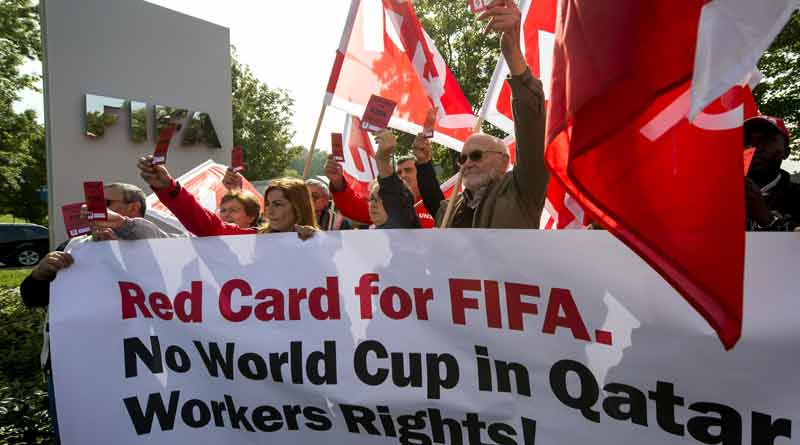 Regardless of Qatar’s conservatism in hosting the World Cup, the FIFA president has stood by the country in the sense that Qatar has stood by migrant workers. But it is half true! The 6,500 migrant workers who died in the preparation of the World Cup in the last 12 years have already been forgotten. 69 percent of them are Indians. Will these data survive the pressure of the petro-dollar? in pen Sutirtha Chakraborty

motherA couple of weeks ago, the former president of FIFA, Sepp Blatter, shocked the world and commented – ‘Letting Qatar host the World Cup is a big mistake.’ In 2010, when Blatter publicly announced that the World Cup will be held in Qatar in 2022, the world was surprised. Because this small country in the desert had no football culture, no football infrastructure. That’s when the complaint arose – how can a country get the responsibility of organizing the world’s best sports competition like the World Cup with only money?

Just 24 hours before the first match, FIFA’s current president Gianni Infantino’s press conference in Doha showed how uncomfortable FIFA’s current bosses are with Blatter himself fueling the controversy before the start of the World Cup. 12 years ago, Blatter argued for taking football to new countries. Infantino’s response to critics is full of politics. He drew the history of Europe’s 100 years of development. He said that he himself is the child of migrant workers and is gay. Standing next to Qatar, Infantino’s cannon to the inhabitants of the developed world, change does not come overnight. He said, “When every country in Europe is closing its doors to migrant workers from poor countries, Qatar is sheltering thousands of migrant workers from India, Pakistan, and Sri Lanka.” 88 percent of the residents of Qatar are immigrants, that is also true!

At the opening ceremony, Qatar showcased its wealth. As the World Cup progresses, the world’s attention may be limited to football. The 6,500 migrant workers who died in Qatar while building seven stadiums, a metro rail network and countless hotels in 12 years may soon be forgotten. The fact that 69 percent of these 6,500 dead workers are Indians may not be published in the media of this country. No one will have time to look into the debate over whether Budweiser beer is served in Qatar stadiums. The issue of gay rights is sure to fade away. Many male and female football fans have already boycotted Qatar over the strict dress code. But the frenzy of the one and a half lakh fans who have appeared in queues ignoring the dress code will overpower the World Cup in a few days. As a result, Infantino has nothing to worry about. At the end of the day, it may turn out that the World Cup in Qatar is not only the most expensive, but also the most successful.

Yet the questions that the Qatar World Cup brought to the sporting world are not to be ignored. It is heard that Saudi Arabia has started activities for the organization of the 2030 World Cup jointly with Greece and Egypt. Like Qatar, this Arab country does not have a democracy. This country is also bound by various conservatism and rules. Human rights violations are rampant here. Whether it is appropriate to measure the strength of the petro-dollar alone to host a spectacle like the World Cup should be judged by Qatar’s experience.

The uproar around the world that Qatar should not have been allowed to host the World Cup is Benazir. Politics has never been avoided in organizing major sporting events around the world. The 1980 Moscow Olympics boycotted by 65 countries under its tent, including America, has become history. The last World Cup was held in Vladimir Putin’s Russia. While Putin has no problem walking the streets in a bikini or drinking in public in Russia, a section of the US media is questioning the extent of democracy there. In their words, “standing in Russia, the conflict with Ukraine is being called a ‘war’ by the police.” Such a suffocating situation does not exist in Qatar. When the World Cup was held in Argentina in 1978, there was a dictatorial military regime. If they protested, they would be thrown from the helicopter. Yet FIFA hosted the World Cup there. China hosts major sporting events, including the Olympics. Do workers have any rights there?”

Complaints against Qatar: The countless Indian, Pakistani, Bangladeshi or Sri Lankan migrant workers involved in building the World Cup infrastructure, including the stadium, had no holidays, no right to leave work, and had to work up to 18 hours in unbearable heat. As a result, 6,500 migrant workers lost their lives. And now these migrant workers are being forced to leave Qatar before the World Cup to avoid controversy.

While questions about democracy, human rights etc are being raised ahead of the World Cup, it is also a fact that most of the major sporting events around the world these days are held in non-democratic countries. According to a recent survey, 35 percent of major sporting events this year are held in countries where state power is in the hands of dictators. Economics also works behind this. Democracies are losing interest in hosting these mega sporting events because of the cost. The quality stadiums that are built for the World Cup or the Olympics are no longer useful. Governments in democratic countries do not want to take on the huge financial burden of hosting sporting events, as it involves holding people accountable. No democratic government would want to spend on the World Cup or the Olympics by cutting social spending. Qatar is spending 18 lakh crore rupees to host the World Cup. Which is half of India’s annual budget. Will India spend half of the budget to do the World Cup? never To do this, the central government will have to close all social schemes. It is an unrealistic thing in democracy! As a result, it is also true that FIFA will have to approach these petro-dollar fed dictators to spread football in the developing world. In fact, money is the last word. The Qatar World Cup will remind us of that again and again for the next month.