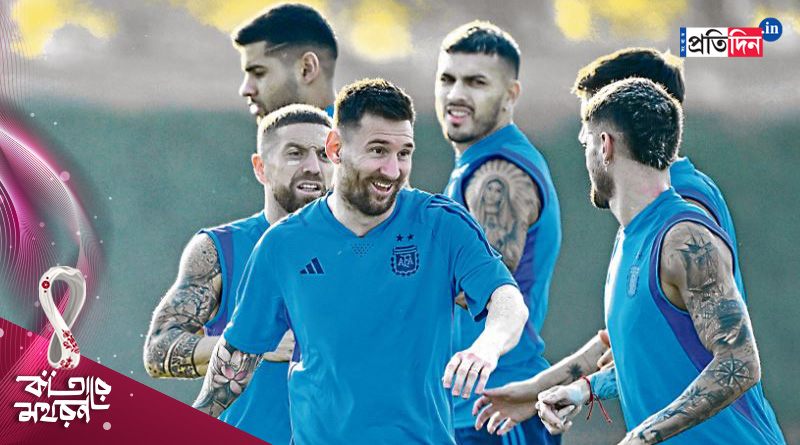 Dulal De, Doha: After removing all doubts, he is finally entering the field to touch the World Cup (Qatar World Cup 2022). But since his arrival in Doha, so many words have been spent on his injury, his play, his non-play, that Messi (Lionel Messi) brought up the topic at the press conference before the match and said, “Please stop spreading confusion about me. Never said, I didn’t practice with the team. Sometimes they say, I did it alone. An issue is being created with that. In fact, I was preparing myself for the first match.”

What Ronaldo said to the media in the press conference about the controversy about him sitting in the Portugal camp of Al Shahnia this morning, Lionel Messi made a very similar complaint to the media in the afternoon at the main media center of the International Library of Qatar. The first match is against Saudi Arabia. Messi came in front of the media for the first time this morning on the field of Qatar University. It was said from the Argentina camp that more than 15 minutes of practice will not be seen. Argentina’s captain spent those 15 minutes stretching.

When Messi was not there, the team management had no objection to take pictures and live in the practice. But since Messi practiced in front of the media on this day, there was a strict message from the Argentina camp to the media at the beginning, that no one can take pictures except professional photographers. And that too only for 15 minutes.

In the afternoon, he accompanied coach Lionel Sebastian Scaloni to the main media center of the Qatar International Library to hold a press conference.

White t-shirt inside. White jacket with Argentina Football Association logo on top. At the start, when Messi sat down at the press conference, Scaloni was waiting outside. Scaloni arrived after Messi’s press conference. Before that, he expressed some anger for creating confusion about him in the beginning.

He said long ago that this World Cup is over for him. As a result, he is naturally eager to win the World Cup at the last opportunity. However, the Argentina captain did not forget to mention that there are many problems while playing the World Cup in the middle of the season. He said, “This time I am going to play the World Cup in a completely different situation from the previous four World Cups. Before the start of the World Cup, the preparation of the national team was going on for a month. I didn’t get that opportunity to prepare this time. I came to the World Cup to play in the club. Yet the importance of the World Cup is always different. And the first match in any World Cup is very important. Looking to start the match against Saudi Arabia tomorrow well.”

Martínez in goal is the way Scaloni lined up his starting XI after practice today to get off to a great start in the first match. Can choose three defenders, Molina, experienced Romero and Otamendi. Midfielders can be – Marcos Acuna, Rodrigo de Paul, Leandro Paredes, Alexis McAllister. Three in attack – Messi, Lotaro and Di Maria. Although Scaloni did not want to say his first team against Saudi when the press conference came on this day. “Whatever the problem, we have to give our best in the first match,” Messi said. This is probably my last World Cup. So I don’t want to miss the opportunity.’

Argentina are unbeaten in the last thirty-six matches. In such a situation, it is not possible to say whether Argentina will ever play in the World Cup. He also won the cup again. Bringing up that topic, Messi said, “I don’t want to look at the old side. I can only say that I am very happy at this moment. Everything happened exactly the way I wanted to start the World Cup. Now the rest will be seen in the field. I can say this, I will give my best on the field.

He seemed very committed as he spoke the last words. Talk about the last World Cup.