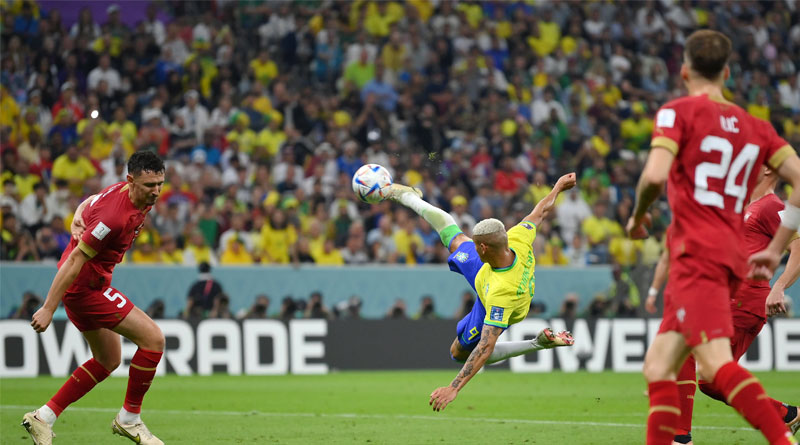 News Daily Digital Desk: Not an incident. No mistake. Brazil started the World Cup like Brazil. The scoreline says the result of the game is 2-0. Both goals were scored by Richard Lisson. However, this scoreline does not say how much power Brazil has shown in the whole match. Especially in the second half, how the Brazil team full of youth and agility is playing with Serbia. Apart from the start of the first half, Serbia could not challenge Brazil even once in the whole match. That is the biggest success of this Brazil team. Tit’s boys showed why this year’s Brazil team is considered as one of the favorites of the tournament.
Two major incidents have already occurred in the World Cup. Naturally, before going into today’s match, the fear of that incident was haunting the Brazil camp as well. Tete Brigade was therefore extra cautious before going against Serbia. At the beginning of the match, instead of going for an all-out attack, coach Tite took a slow policy. He was trying to use the skill and speed of Rafinha and Vinicius on the two wings to attack. Neymar can be seen operating from the bottom these days. But coach Tite’s slow-moving policy did not help Brazil much in the first half. The young Brazilians did not give their best as they overpowered Serbia. Despite this, Brazil created at least three good chances in the first half. Midway through the first half, Serbian goalkeeper Savic practically pounced on Vinicius’ legs like a tiger to save a sure goal. At the end of the first half, a mistake by Serbia’s defense led to another chance for Vinicius. But the Real Madrid star could not use that either. Rafinhao wasted the opportunity awkwardly in the middle. As a result, Brazil could not open the scoring in the first half.
Coach Tite changed tactics at the beginning of the second half to break the Serbian defense. This time, Neymar, Rafinha, Vinicius’ treble began to attack in a cut-cut style from the beginning. In front was Richard Leeson. Serbia’s defense looked shaky early in the second half. An hour into the match, Alex Sandro’s powerful long-range shot virtually opened the Serbia goal. But this time it was Brazil’s turn to be the barpost. However, Samba Boys did not have to wait long to score. Within a couple of minutes, the desired goal came from the feet of Richard Lisson. Vinicius’ Zoral shot from the right wing was saved by the Serbian goalkeeper in the first attempt, but the young Brazilian star made no mistake in pushing the ball into a practically empty net from the rebound.
Once the goal was opened, the speed of Brazil’s play showed that more goals were to come. The second goal also came from the foot of Richard Lisson. The previous goal he scored like a opportunistic striker, this time the goal that came from his feet was truly world class. The way he curled a bicycle kick into the Serbian net from Vinicius’ high cross from the right was truly spectacular. Early on, this goal was a contender for being one of the best goals of the tournament. However, there were several scoring chances at the end. However, Serbia has been narrowly saved time and time again. Richard Lisson’s brace gave Brazil a much-anticipated win on the day.