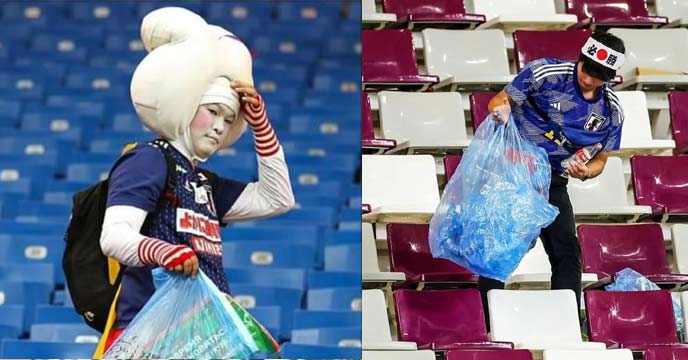 Suzanna Ibrahim Mohna, Doha City: ‘Joy Asia’ – that’s what I want to say. I am sending the news of the World Cup game (Qatar WC) to Kolkata and Dhaka together from Doha City, and I see an incredible scene- The Japanese are leaving behind the joy of victory and are cleaning the Khalifa Stadium. Four-time world champions Germany were defeated by the blue samurai Japan. Despite this historic victory, the Japanese audience was unimpressed. They are engaged in gallery cleaning operations. Are these emotionless people?

I also wrote about this Japanese clearing operation when I sent the report on Wednesday morning. And I wrote that even though Germany is one of the best teams in the world, it does not have much support. Their support is as much as the viewers of their own country. However, a large number of Germans have come to Qatar. And after the defeat to Japan, he returned to his temporary shelter in a broken heart.

But the Japanese? They cleaned the Khalifa Stadium before returning. As has been seen for the past few days, this is also the case today. Seeing this scene, it has to be said again that as the Japanese fans won the game before the game, after the victory on the field, they continued to win the ‘Dil’.

Expatriate Bangladeshis, Indians and Pakistanis are buzzing in Qatar. Exactly how many Japanese people there are can be counted by hand. Day and night, these Japanese are carrying out cleaning operations of their own volition.

In the morning, seeing a man with the flag of his country Japan, it seemed that there was no work for them to eat, Khamoka was working for nothing. A short, chubby man was walking around with a broom and a large plastic bag to dispose of the garbage. I have been seeing such Japanese for the last few days on the occasion of World Cup (Qatar WC). We love to do that, he said in broken English. It is not good to have dirt.

Understand the story! The Japanese have come to the World Cup not to watch the game, but not to cheer for their country. They have come to sweep. Just like before the Japan-Germany football war on Wednesday, the Japanese quietly removed their labor of love. He did that after winning.

Japan is one of the cleanest countries in the world. They are very different. It is their passion to remove trash. As Japanese spectators watch the game in the stadium, they lovingly pick up the bags, bags, water bottles (water bottles) left by the spectators from other countries. Cleanliness is their primary duty. Qatar is such a clean country. However, the situation is complicated due to the pressure of the huge number of visitors from different countries on the occasion of the World Cup.

The way these Japanese fans are cleaning the stadium has greatly reduced the work of the stadium cleaners. Each Japanese sweeps at least a hundred spectators. Qatar is nothing, the Japanese have won the hearts of the whole world.

The entire Arab world cheered after Argentina lost on Tuesday night. All of Asia, including Qatar, had their eyes on Japan on Wednesday. They won under the pressure. The Japanese are quiet despite the frenzy of the World Cup. Instead of shouting for the country, volunteering at the stadium means they are more interested in cleaning up.