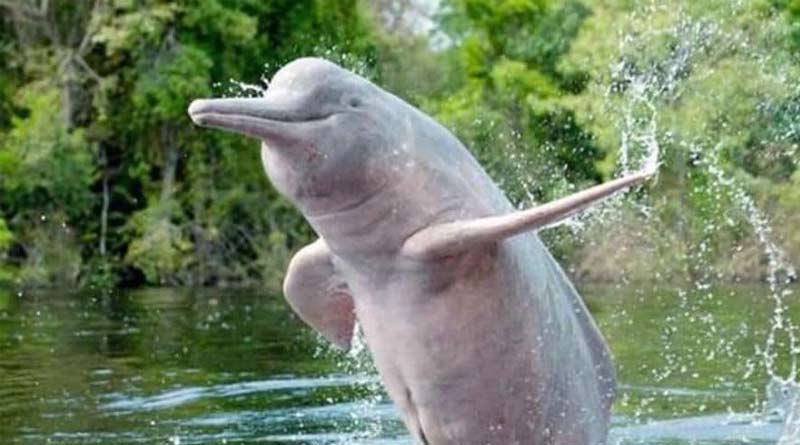 Dhiman Roy, Katwa: The number of Gangetic dolphins or Shushuk is rapidly decreasing due to the death of Gangetic dolphins one after the other by getting caught in fishermen’s nets. Despite continuous awareness campaigns by the forest department, nothing can prevent death. So this time the forest department has taken initiative to protect the Gangetic dolphins in Katwa of East Burdwan district To prevent the death of dolphins, a plan has been taken by the department to form ‘Dolphin Mitra Club’, said ADFO Somnath Chowdhury of East Burdwan District Forest Department.

Fishermen from areas like Katwa, Ketugram etc. will be in that club. Apart from this, representatives of local panchayats, local MLAs will also be kept in the club. It is known that at one time many Gangetic Dolphins or Shushuks were seen in Bhagirathi in Katowice. But they have started to decrease gradually. Currently, the number stands at 40. The Wildlife Institute of India is concerned about the issue. It may be noted that two dead snakes were recovered from Bhagirathi in Katwa by July last year. The dolphins had injury marks on their bodies. Later, in the post-mortem report, the forest department came to know that the two dolphins died due to injuries. The forest department claimed that the dolphins were injured mainly by getting caught in the nets. According to local and forest department sources, the nets used by fishermen for fishing in Bhagirathi are made of very strong and narrow threads. The nets are called ‘electric nets’ in the local language. The nets are so fine that even the smallest fish cannot escape.

Somnath Chowdhury also said, “Dolphins are dying one after another by falling into the trap of that net.” The number of dolphins is decreasing and has reached the bottom today. The issue is thought provoking.” But Dinesh Chandra Barman, secretary of Katwar Shell Fishermen’s Association, claims, ”Local fishermen do not use electric nets. Outside fishermen come and use those nets to catch fish in Bhagirathi.” A Ganga Dolphin Conservation Center was set up at Shankhai Ghat in Katowa by the department a few years ago. Continuous awareness campaign was going on. In particular, the forest department started keeping a close eye on the Ajay Bhagirathi Junction area at Katwa known as ‘Shushuk Point’. However, the death of the Gangetic dolphin could not be prevented. According to statistics, over 100 dolphins were seen in Katwa in 2020, but now it has come down to less than half a century. On Sunday, two surveyors from the Wildlife Institute and India came to Ketugram to find the cause of the dolphin’s death. They talked to the fishermen for a long time about this. Rupam Banerjee, a member of the survey team, said, “We are investigating the reasons for the rapid decline in the number of Gangetic dolphins in Katwa.”

Earlier on Saturday, the officials of the forest department held a meeting with the fishermen at Sokapanpur in Ketugram. In addition to the officials of the department, fishermen, Ketugram MLA Sheikh Shahnewaz, Zilla Parishad Forest Officer Shyamaprasanna Lohar and others were present in the meeting. In that meeting it was decided to form ‘Dolphin Mitra Club’. ADFO Somnath Chowdhury said, “It has been decided that if a dolphin gets stuck in a fisherman’s net, they will immediately inform the forest department.” He said that it has also been decided to give some compensation to the fishermen if their net is torn.