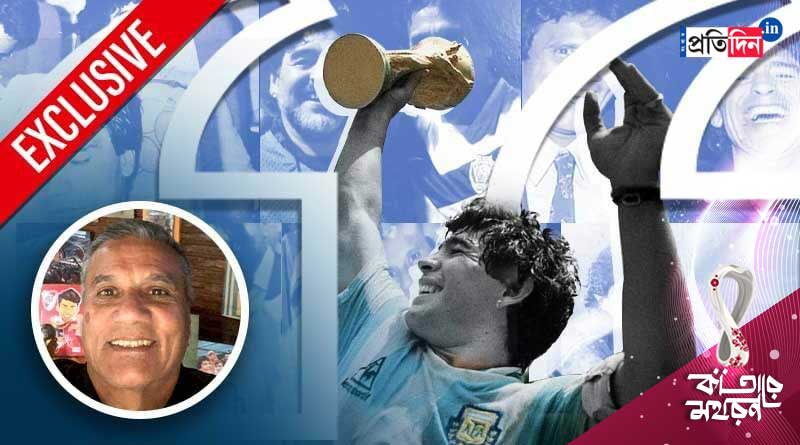 Krishanu Majumder: Everyone remembers Diego Maradona’s best goal of the century. But how many people know about the football god who got the last ball that day? How many people remember him? He is Hector Enrique.

Marodana is spread throughout his home in Argentina. Maradona in his bedroom, Maradona in the drawing room. Only Maradona is in Hector’s heart. Who will say it is 2022? It seems that he is in that 1986.

Argentina’s world-winning captain passed away on November 25, 2020. But Hector does not remember the death of his captain. Maradona is holding his breath. That is why he told the representative of Sangam Pratidin Digital, “Diego is with me every day, all the time.”

22 June 1986. Argentina in front of England in the quarter-finals of the World Cup in Mexico. First the ‘Hand of God’ goal, and then that historic run from midfield. The ‘goal of the century’ became ‘the best goal of the century’ when Maradona stopped a 60-metre fairytale run by tripping one England player to the ground. The ball is in England’s net. Peter Shilton is stunned. Amazed commentator too. He could not contain his emotions. After that dream goal, Hector joked to Enrique, “I played the ball so that Diego had no choice but to score.” That’s what folklore says. And what is Hector saying about that famous goal? “Maradona took the ball from his own half and beat six England players to score. The best goal in football history. Who Maradona got the last ball from that day will forever be a matter of curiosity.”

A single burst of energy and talent can make a huge difference in the world, as seen in Mexico. A goal put Maradona on the altar of God. He can’t lose. He is immortal. Such an image was created for the teammates of the famous number ten jersey holder. Former world champion like Jorge Buruchaga said, “We thought Diego could beat death.” But a man of flesh and blood, like Maradona and five others, reminded me of that cursed day a couple of years ago. Silently, silently, death came and took away the king of all hearts.

Looks like another November 25 is knocking at the door. Before that, Maradona-fan Hector recalls the cursed day saying, “I heard the news of Diego Maradona’s death that afternoon after returning from training. Dr. Lentini once worked with Diego. He called me and asked, have you heard anything about Maradona? I heard that Diego is no more, that he is dead. But I didn’t believe it. I told Dr. Lentini, this is completely fake news. I believe that Diego is absolutely right. But after a while we were all wrong. Maradona could no longer dribble death. Diego’s parents ‘Dona Tota’ and ‘Don Diego’ were waiting for him. They loved him very much. Diego rests in peace with them.”

Maradona brought football to the level of art. He used to rejoice in the joy of creation on the green grass field. Maradona is an emotional name. A strange contrast in his life. On the one hand the recognition of superiority and on the other hand the son of controversy. Handballed, doping, drug addicted, a tarnished hero. Yet his popularity skyrocketed. Even after death, everyone believes that Maradona is still there. He is immortal. All those famous runs of Maradona with the ball are floating in the eyes of football lovers. Hector is also drowning in the memory of the beloved captain. Saying, “To me, Maradona is a unique player. There was no one like him, never will be and still is no one. People with heart like Diego Maradona are rare in this world. Maradona’s game was spectacular. Sometimes seeing Diego makes me jealous. He used to dribble so easily, he used to score goals very easily, it is natural to be jealous when you see them. I also won the World Cup. But seeing Diego play was a great feeling. To me, Maradona is a unique footballer.”

World Cup-Buvuksu is a country Argentina. At that time, the blue-white jersey holders won the world championship in Mexico. 36 years have passed since then. The political pot has changed in many countries of the world, football got Maradona’s successor, Lionel Messi. But the cup did not come. This time Messi stumbled in the first match in Qatar. Argentina is looking for a way in the desert after being defeated by a much weaker Saudi Arabia. From country to desert now hectares. With him is former world champion Batista, Carlos Tapiara. What is the former world champion saying about Messi’s Argentina? “The previous match is past,” says Hector. Now is the time to encourage the national team. We have the utmost confidence in Scaloni and his coaching staff. Every footballer is trusted. I will talk about Messi in particular. He is a football genius. I have a strange feeling watching him play. Messi can expect a world title in his career. Let’s hope God wills the same.” Agraj Hector stands by Anuj Messi in times of disaster.

Standing in this present day, Hector is going back to the past. Maradona is peeking. “I have a picture of Diego in my room,” says an emotional Hector. I sent you that picture. You can surely understand my feelings towards Maradona. I knew Maradona from a very young age. When I was 14, Marodana was 15. Diego started playing in the first division by then. Maradona has started to show magic. I fell in love with Diego from the moment I met him. Maradona as a person is very big. Diego is with me every day. My forever companion.”

Hector was Maradona’s teammate in the national team as a footballer. He was also involved with coach Maradona. He was also Maradona’s partner in club football. “Diego was the coach at Al Wasl Club,” says Hector without the aid of a time machine. I was his assistant. I feel lucky to have worked with Diego. Undoubtedly Diego is a great coach. I think coach Diego is much bigger than footballer Diego. I was Diego’s assistant in South Africa World Cup. Nothing went right for us in the match against Germany. Not only were we knocked out of the World Cup, we were crushed by Germany by four goals. After that heartbreaking defeat we gave up the responsibility of the national team.
Argentina played very well in the 2010 World Cup. Unfortunately Messi could not score a single goal. It was difficult for us to accept that too. Diego resigned as coach after losing the World Cup in South Africa. Maradona could not forgive himself.”

This is the first World Cup without Maradona. The former say, “Leo, for Diego at least won the cup this time.” But will the World Cup go to Buenos Aires? Messi’s road to win the World Cup is getting tougher. Hector says, “Argentina won the championship before us in 1978. We came very close to winning the world in 1990 and 2014. God willing, we can win this time. For the people of Argentina, the trophy needs to come home. The people of the country need the trophy very much.” Are Messi listening to the elders?

On the 20th of this month, the football festival was celebrated in Qatar. Hector came to Qatar from Argentina that day. After hearing that he had been contacted from faraway Kolkata, the emotional World Cup player sent a photo with Maradona’s memories. One of the pictures shows Maradona-Hector sleeping on a plane seat. Regarding that picture, he says, “I sent you a picture. You will see all of us sleeping there. We were returning after fulfilling our dreams. Thanks to Carlos Bilardo, all his coaching staff and of course Diego Maradona.”

No Maradona. Fans think that Diego is making peace with football in the distant sky. Some say, he is constantly showering blessings on Messi. It goes without saying that on Friday, November 25, the emotions of football fans will turn into mass hysteria. And memories of three long years ago will appear in Hector’s eyes. Getting the ball from him, Maradona is shattering England’s dreams. He then runs to the corner flag with his hands raised to celebrate the goal. Judging in terms of time, 36 years is a long time. As the saying goes, time is the best healer. Who said, time forgets many things? Time gives many things back.