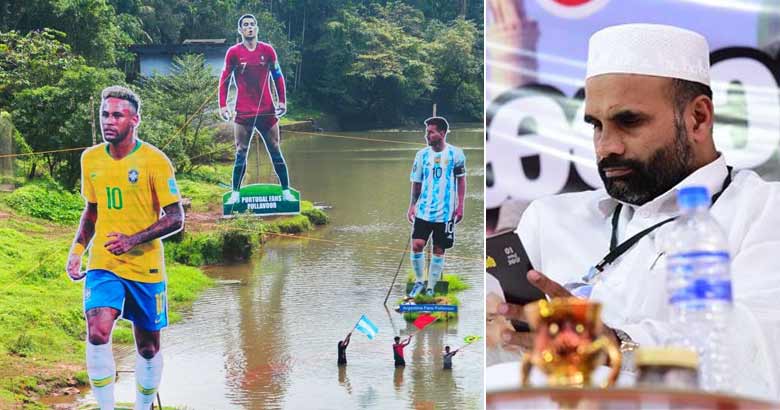 Kozhikode: With the start of the Football World Cup, Samasta has warned that many believers are mistaking their prayers and should not indulge in excessive intoxication. A warning will be issued after the prayer in all mosques that football should not become intoxicating and star worship should not go too far. General Secretary Nasser Faizi further informed that the instructions have been given.

Nasser Faizi pointed out that after the start of the World Cup, it was noticed that believers were abandoning namaz.

Football as a sport is not a taboo game. Basically whatever is beneficial to human physical and mental development is permissible for man.

The Prophet (PBUH) told the Ethiopians, who had performed the traditional program of arrows on the day of the festival, to continue it.

‘The believers will be those who turn away from unnecessary things’ (23:3)

If they hear vain words, those who stand by them will turn away and say: What we have is our deeds. What you have is your deeds. Salaam to you. We don’t need fools.

*The game should not be feverish and intoxicating*

A believer should not have excessive influence or enthusiasm in any matter. That should be the attitude of a believer in playing and watching the game. Because the time and money he spends are given by his Lord. For every moment and every penny he will have to give an account to his master. Therefore, football should not become an addiction. The impact certain games and players have on us is immense. Care should be taken not to let that influence become an addiction. Anything that hides about many responsibilities and forgets everything and gets absorbed in them is addiction. Intoxication is not just alcohol and drugs; Many things that we see as entertainment must be considered taboo if they weaken our sense of responsibility.

Most of the World Cup matches are played at night and after midnight in India. Those who watch the game until nightfall should watch it in such a way that it does not disturb the daytime and nighttime congregational prayers. Football addiction should never deter any believer from performing congregational prayers.

And We have made your sleep restful.

And We made the night a garment.

And We have made the day a time of life.

It is natural for those who love the game of football to have a special interest in any team or player. But it is not right that that interest turns into worship and their fans become slaves.

Huge boards and cutouts costing tens of thousands and lakhs have appeared in every street and even in the villages.

It is surprising that people who have no means of food and no job or income share in this waste. It is not love for football, but merely an expression of the idolatry he has built up in his mind towards his football hero.

Love and playfulness are very dangerous when they cross the line into worship. Only Allah should be worshiped. Making fans a personal worship will even cause shirk.

Similarly, there should be no wastage

Verily the spendthrifts are brothers of the devils. The devil is very ungrateful to his Lord.

There should be no worship of the individual and no national commitment to the nation instead of embracing the game in the spirit of sportsmanship. It is also not the right way to walk with the flag of Portugal and the anti-Islamic countries who are the invaders and cruel people of India.