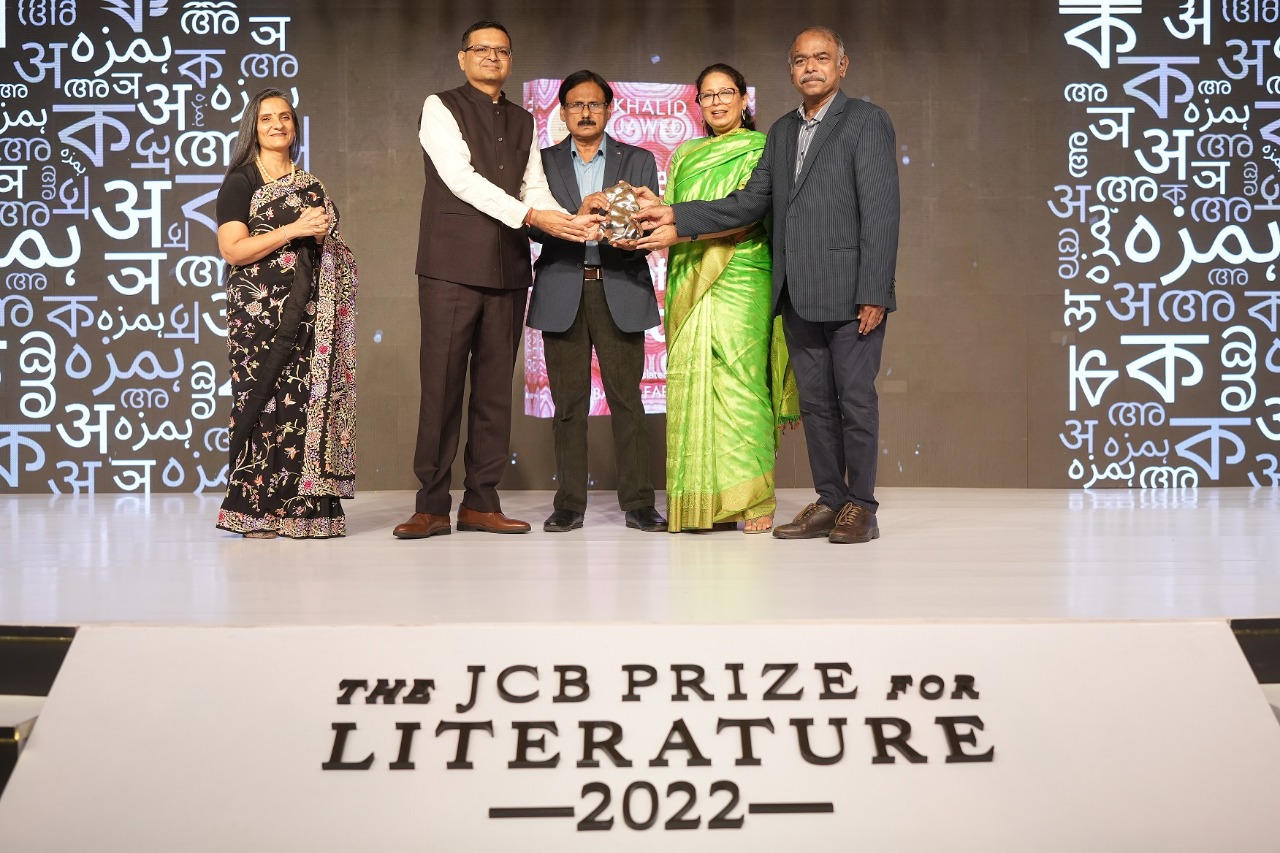 Agartala, 21 November 2022: Khalid Javed’s The Paradise of Food, translated by Baran Farooqui, published by Juggernaut, was announced as the winner of the JCB Award for Literature worth Rs 25 lakh at the Oberoi, New Delhi. JCB Chairman Lord Bamford announced the winner virtually during the hybrid event, where JCB India Chief Operating Officer Sunil Khurana and 2022 Jury Chairman AS Panneerselvan presented the trophy to the winning author. A Bildungsroman of a Man (and Society) Where Food Triggers Memory and Tragedy Food Paradise tells the story of a middle-class Muslim joint family over fifty years in which the narrator, whose life is followed from childhood to old age, finds a place for himself. Struggles for, at odds between his home and the outside world.
The Paradise of Food is the fourth translation to win the award and the first work in Urdu. Khalid Javed also received the award trophy, a sculpture by Delhi-based artist duo Thukral and Tagra, titled ‘Mirror Melting’.
The award ceremony began with a welcome note from Literary Director Mita Kapoor, followed by an address by Shriman Deepak Shetty, CEO and Managing Director, JCB India. The evening was enlivened by an ensemble of classical dance performances by the Sriram Bharatiya Kala Kendra, leading up to the announcement.
The book was selected by a panel of five judges from the JCB Prize’s most diverse shortlist, including AS Panneerselvan (Jury Chair), Amitabh Bagchi, Dr J Devika, Janice Parriat and Rakhi Balaram. The esteemed jury members were unanimous in praising The Paradise of Food.
AS Panneerselvan (Jury Chairman): “The Paradise of Food is a celebration of human spirit, hope, loss, longing and anxiety. It is a fine artistic achievement where the aesthetic negotiates a difficult political trajectory that is haunting our country. The carnivalesque element makes it a modern fiction.
Janice Parriat: “This rare, beautiful book achieves, with subtle, startling, singing prose, what few have in recent and years past – a microscopic but epic exploration of humanity in all its ugliness and beauty, its cruelty and kindness. , his folly and wisdom. I was amazed, fascinated, thrilled.

Amitabh Bagchi; “This singular and moving book shines a bright light on the violence at the heart of human civilization. The language has several beautiful and unusual formulations which are a literary achievement of both the author and the highly skilled translator. A literary landmark in an under-celebrated genre of Urdu’s grand literary tradition, this work deserves to be widely read in India and beyond.
Dr. Jay Devika:, ‘The Paradise of Food acts as a mighty ice pick in the winter of civilizational crisis that has gripped the countries of South Asia. And it does so by combining the poetic energies of Urdu, placing freedom above caste formation, which we consider a work of a novel. The translation is perfect and inspiring”.
Rakhi Balaram: “A book of indescribable genius, Khalid Javed’s The Paradise of Food blazes a trail and redefines the contemporary Indian novel” (in English). Beauty and horror, sacred and profane, the book attracts and repels us as we turn each page. Our understanding of the personal and the political intersects in the most unforgettable ways through food and the kitchen.
About Khalid Javed
Khalid Javed is one of the foremost Urdu novelists of today. He is the author of fifteen works of fiction and non-fiction, and a recipient of the Katha Award, the Upendranath Ashok Award and the UP Urdu Academy Award. He is a professor at Jamia Millia Islamia University.
About Baran Faruqi
Baran Farooqui is Professor of English at Jamia Millia Islamia University. He is the acclaimed translator of The Colors of My Heart, a few poems by Faiz Ahmed Faiz.

Note to the editor

About JCB Literature Foundation
JCB Literature Foundation, a non-profit organization registered under Section 8 of the Indian Companies Act, is solely responsible for running the award.
In 2018, JCB India established the JCB Literature Foundation, whose mission is to promote the literary arts in India, and whose main function is to administer the JCB Prize for Literature. A leading global manufacturer of earthmoving and construction equipment, the company has been active in India since 1979. JCB’s aspiration to create a lasting cultural legacy in India is based on this significant and lasting involvement in the country’s social and economic life.

About the jury
AS Panneerselvan (Chair) is an Indian journalist, editor and columnist. He heads the Rosa Muthaiah Research Library, Center for Study in Public Sphere, Chennai. He is also the author of Karunanidhi: A Life, his definitive biography of M. Karunanidhi, and editor of a collection of essays produced by Journalist Fellow, Uncertain Journeys. In 2022, the Government of Tamil Nadu awarded him the GU Pope Award for his literary contribution. In his extensive career in media, he has worked with several prestigious media houses and networks including Sun Network, Outlook Magazine, The Hindu. His next book is The Periodic Table of Tamil Modernity: 1858 to 1968.
Amitabh Bagchi is the author of four novels. The first Above Average was one of his bestsellers. Her second novel, The Householder, was published to critical acclaim, the third, This Place, was shortlisted for the Raymond Crossword Book Award 2014 and the fourth, Half the Night is Gone, went to the 2019 DSC Prize for South Asian Literature and the 2018 JCB Prize. was shortlisted for literature. He has authored and published several papers over his extensive career as a specialist researcher and professor in computer science.
Dr Jay Devika is a historian, feminist, social critic and educationist. He is currently researching and teaching at the Center for Development Studies. She has written several books and articles on gender, politics, social reforms and development in Kerala, such as Kafila, Economic and Political Weekly and The Wire. He has translated both fiction and non-fiction books between Malayalam and English, including translations of Nalini Jamila’s autobiography and short stories by KR Meera and Sarah Joseph.
Janice Pariat “Everything the Light Touches”, The Nine-Chambered Heart, Boats on Land: A Collection of Short Stories and Seahorse: A Novel. its author. He received the Young Writer Award from Sahitya Akademi and the Crossword Book Award for Fiction in 2013. In 2014, he was the Charles Wallace Creative Writing Fellow at the University of Kent, UK, and in 2019, he was the Writer in Residence at the TOI Residency in South Korea. Janice also teaches Creative Writing and Art History at Ashoka University.
Rakhi Balaram is Assistant Professor of Global Art and Art History at the State University of New York at Albany, where she specializes in modern and contemporary art. She is the author of Counterpractice: Psychoanalysis, Politics and the Art of French Feminism and 20th Century Indian Art Modern, Post-Independence, Contemporary. His curatorial work includes Fragility, an exhibition of contemporary Indian art. His research has been supported by an Art Histories Fellowship in Berlin, the ICI Berlin Institute of Cultural Inquiry and a Tata SPEAR grant, among others. Balaram holds a double doctorate in French literature from Cambridge University and art history from the Courtauld Institute of Art.