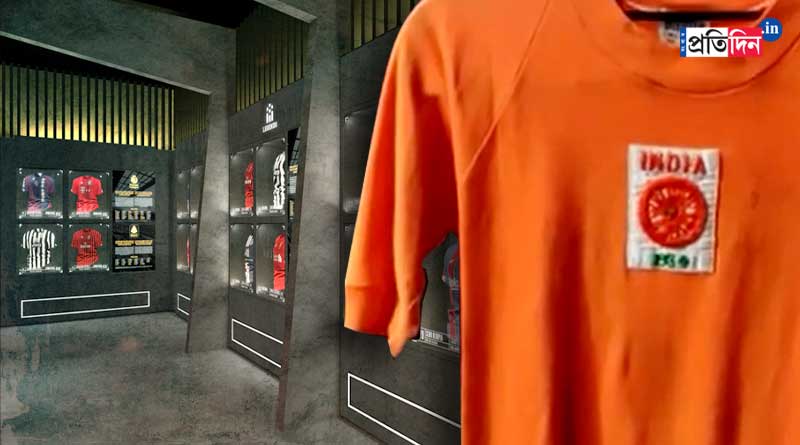 News Daily Digital Desk: A Bengali jersey has been placed in Madrid’s football museum. In that museum there is the famous number 10 jersey of Diego Maradona. The football museum in Madrid will be inaugurated in March next year. The number 12 jersey of Krishnendu Roy has got a place there. No other Indian footballer’s memorial is there. Better to say, the country’s only ‘representative’ jersey is Dakabuko, a Bengali right back, in a museum in Madrid.

Real Madrid, Atlético Madrid club images appear in the eyes of football lovers when they hear the name of Madrid. A football museum has been created in the Puerta del Sol area of ​​Madrid. His name is Legends. More than 5,000 football memorabilia finds its place in the museum. Six hundred football items will be on display after the Legend’s inauguration. History is associated with them. They have been used at one point or another in FIFA World Cup, European Championship, Copa America, UEFA Champions League, Club World Cup.

The 1986 World Cup final was held at the Azteca Stadium in Mexico. Argentina faced Germany. In the final, Diego Maradona’s Argentina beat Germany to become world champions. Maradona was marked by Lothar Mathews in that final. Maradona and Mathews exchanged jerseys at the end of ninety minutes. Former German captain Diego Maradona has handed over the jersey to the legend museum authorities. Krishnandu Roy’s number 12 jersey is there.

How did that jersey get there? Krishnandu Roy says, “Argentina played against India in the 1984 Nehru Cup. Carlos Bilardo of Seber was the coach of Argentina. Diego Maradona and all but one came to play in the 1984 Nehru Cup. We put up a great fight against Argentina. We lost the match with Ricardo Gareca’s last minute goal.” Jorge Baruchaga, Pompidou. Stars like Julien Camino played in the Nehru Cup.

Krishnandu played for the country after wearing the number 12 jersey. Kolkata Maidan’s well-known Bantuda exchanged jerseys with Argentinian player Nestor Klaasen after the game. His number 12 jersey has been placed in the football museum of the bullfighting nation. Krishnandu Roy says, “It was a moment of great excitement for me to play against a team like Argentina. And to have my jersey in a museum in Madrid is a dream come true. I am very proud. Because I played for India, my jersey has a place in a museum in Madrid today. No other Indian footballer’s jersey has been featured there yet. But let’s hope that we will get a place in the coming days.”

Almost three decades have passed since that India-Argentina match. The world of football has changed during this time. But still fresh in Krishnandu’s mind is the indomitable fight against Maradona’s country, the thrilling memory of taking to the field. A monument to that memory has found its place in faraway Madrid. This is not only Krishnandu’s personal achievement. It can be said that Bengali football is also a sign of tradition. Which reminds, despite being a ‘sleeping power’ of world football, its glory has reached a country on the banks of ‘seven seas and thirteen rivers’.