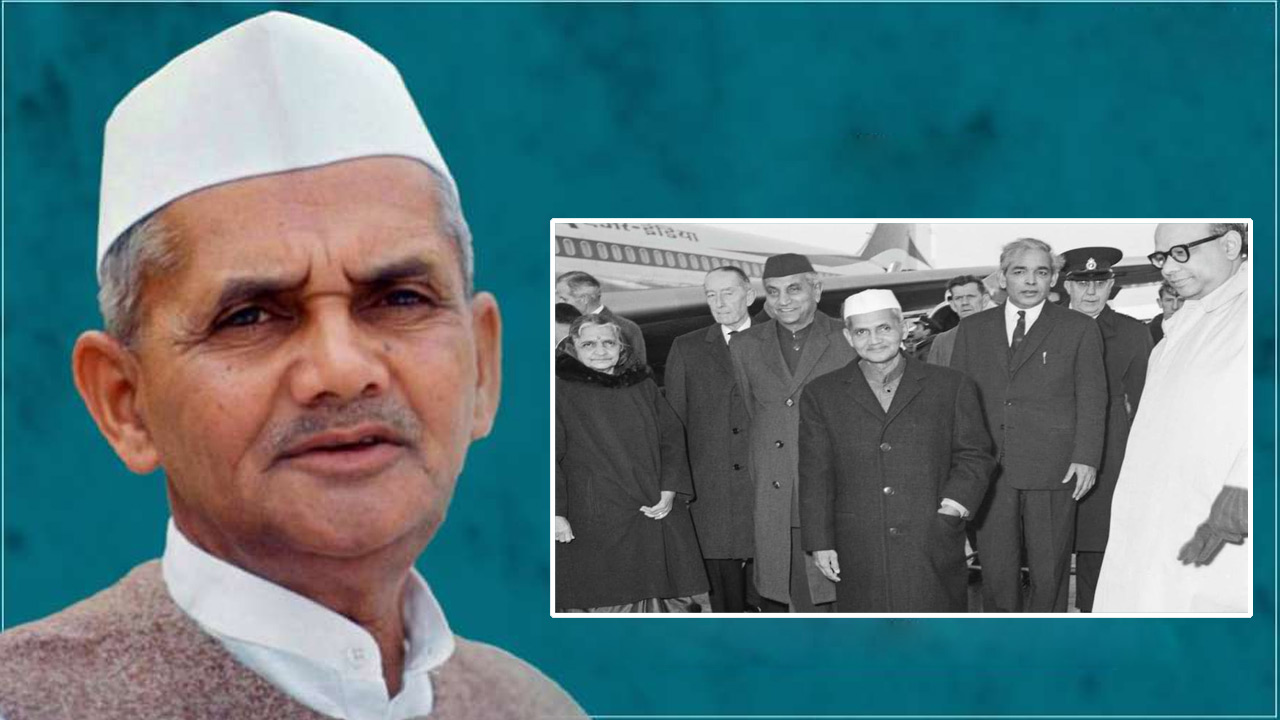 Lal Bahadur Shastri.. Simplicity appears when you mention his name. No one can imagine that he lived a simple and simple life despite being a freedom fighter and the Prime Minister of the country. Today is the 118th birth anniversary of Lal Bahadur Shastri, the second Prime Minister of India. Shastri Ji is regarded as an outstanding statesman for his contribution to the nation’s aspirations for self-reliance and independence. He is a brilliant thinker with extraordinary determination. He not only overcame the difficulties faced in life very easily but also became an inspiration to all. Shastriji is regarded as an outstanding statesman. He was an inspiration to all as he overcame the difficulties faced in life very easily. Even after becoming the prime minister, he faced financial difficulties. It is said that Shastri used to swim across the river Ganges twice daily to go to school. Even after becoming the Prime Minister, there was a shortage of money. He graduated from Kashi Vidyapeeth, Varanasi in 1925 and received the title of “Sastri”. The word ‘Sastri’ refers to a ‘scholar’ or one who has studied the scriptures well. Let’s know some important facts about Lal Bahadur Shastri’s life..

Lal Bahadur Shastri was born on October 2, 1904 in Mughalsarai, Uttar Pradesh. His father’s name is Sarada Prasad Srivastava mother’s name is Ramadulari Devi. His original name was Lal Bahadur Srivastava. Opposing the caste system, he removed the surname from his name. Lal Bahadur Shastri faced many difficulties in his childhood. After his father died he was sent to his uncle. Lal Bahadur Shastri had to swim across the river Ganges twice a day to go to school. After forming the Congress government in 1946, he was appointed as the Parliamentary Secretary of Uttar Pradesh to play a constructive role in governance. Appointed Minister of Police and Transport on 15th August 1947.

Even though he was the Prime Minister of the country he had to take a loan from the government which was repaid by his wife after his death. Whenever it stands as an example of the simplicity of politicians in the country and in the world.

Once Shastri Ji had to buy a saree for his wife Lalita Shastri. They went to a shop. The owner of the shop was very happy to see Shastri. He welcomed their arrival as his fortune. Shastri, they are in a hurry… they need four-five sarees. The shop manager started showing Shastri more than one saree. They are also very expensive. But Shastri ji noticed this and asked him to show a very cheap saree. The manager hesitated to show him. The manager sniffed. Show me the lowest price of saree in the shop. I want that. In the end, the manager took off the sarees as per his wish. Shastriji chose some of those sarees cheaply and paid the price and left.

When he took out the cooler from his box..

This was the period when Shastriji was the railway minister in the Nehru government. I had to go to Mumbai suddenly due to some government work. He chose to travel by train. The railway authorities prepared a first class coach for his journey. The train left from Delhi. As soon as the car started moving, it was realized that something else was installed in the box other than the usual fans. Because it was hot outside and there was a terrible wind blowing. He asked his personal colleague Kailash Babu about this. Sir, a cooler is installed in this compartment for your convenience. Shastriji leaned towards Kailash Babu and expressed surprise and put a cooler? Why did you do this without telling me? We don’t want to travel like this if everything is in the heat. I also have to travel in third class to be a servant of people.. but if this is not possible then I will do what I can. He said that wherever the train stops, I should first remove this cooler from my coach. The train moved forward only after the cooler was removed.

After the formation of the Congress government in 1946, the party appointed him as the Parliamentary Secretary in the state of Uttar Pradesh when it was looking for suitable candidates to play a constructive role in governance. Appointed Minister of Police and Transport on 15th August 1947. Appointed first female bus conductors. He came to New Delhi in 1951 and held many departments in the Union Cabinet. He also served as Minister of Railways, Minister of Transport and Communications, Minister of Commerce and Industry, Minister of Home Affairs and later the second Prime Minister of India.

When the prime minister had to borrow while in office.

Lal Bahadur Shastri’s family bought a car when he was Prime Minister. Fiat car Rs. 12,000 but even at that time Shastri had only Rs.7000. From Punjab National Bank Rs. 5,000 loan and bought a car. His car is now at the Shastri Memorial in New Delhi.

India faced drought in 1965-1966. Then Shastri Ji helped the people a lot to get all the countrymen out of famine through white revolution. All the family members were asked to grow rice and wheat at home. Lal Bahadur Shastri himself planted rice and wheat in this movement. This is what she said.. She also followed and showed.

Lal Bahadur Shastri became the second Prime Minister of India on 09 June 1964 after the death of Pandit Jawaharlal Nehru. His tenure lasted till 11 January 1966. He died suspiciously on the same day in Tashkent, Uzbekistan. At that time, Shastriji went to Tashkent to meet the President of Pakistan, Ayub Khan, to mend the situation after the Indo-Pakistani war. He died a few hours after the meeting. You may be surprised to know that even the Parliamentary Library does not have the records of the Rajanarayan Committee inquiry into his death.