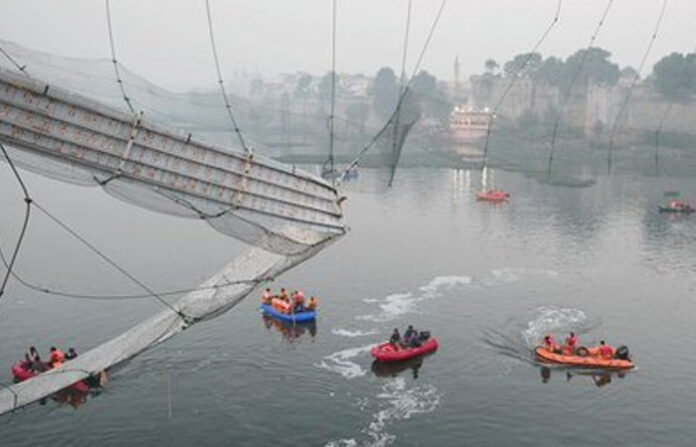 The Wall Bureau: In the investigation of the collapse of Morbi bridge in Gujarat, sensational information is emerging one after another. It was already known that more people than the capacity of the bridge climbed the suspension bridge that cursed night. According to the last report, the Oreva Group, which is responsible for the maintenance of the bridge, issued a total of 3 thousand 165 tickets that day.

This information was given by the government lawyer on Tuesday while presenting the forensic investigation report to the district court. He also said that even though not all the tickets were sold, clearance was given to sell this huge amount of tickets without giving the least consideration to the capacity issue of the bridge.

On the 30th of last month, the Morbi bridge on the Macchu river suddenly collapsed in the evening. The bridge was recently opened after seven months of repairs. There were hundreds of people on the bridge at that time. The entire bridge broke and everyone fell into the water. About 150 people died, including several children.

In this incident, one negligence of the bridge maintenance company came to the fore. 9 people were arrested. The list includes two company managers, two bridge repair subcontractors and five others, including security guards and ticket booking clerks. The case was filed in court.

The Morbi administration informed that the company had opened the bridge ahead of schedule without obtaining ‘fitness certificate’ from them. But the court is not giving a clean chit to the administration. During the hearing last week, the Chief Justice of the High Court, Arvind Kumar, asked the chief secretary of the state, why public tenders were not called for the maintenance or repair of the bridge, which is for the public?

Incidentally, the maintenance of the bridge was carried out by a construction group, ‘Oreva’, working under Ajanta watch manufacturing company. The government gave a 15-year contract to Ajanta. After looking at the last repair paper of the bridge, the court questioned, such an important work has been written in only one and a half pages!

The court also said that the agreement signed in 2008 was renewed again in 2017. The question has been raised, how did the company maintain the bridge till now without renewing the contract. The judge has summoned response from 6 departments of Gujarat government. The court said that the documents of the government’s agreement with the organization from the first day till today, should also be submitted to the court in the envelope. Then this new information came to the fore in the hearing of the case on Tuesday.

What omissions have come to the fore—