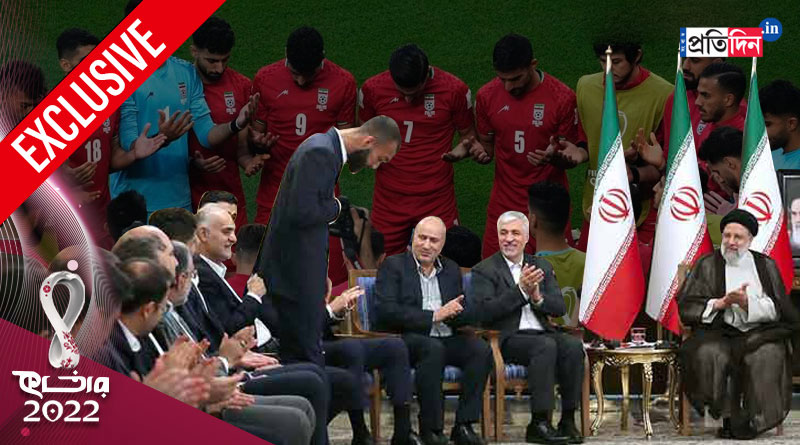 Krishanu Majumder and Mani Shankar Chowdhury: Unprecedented incident in England-Iran (England vs Iran) match. Alireza, Taremira made a silent revolution in Qatar World Cup 2022. The footballers did not sing the national anthem on the World Cup stage to send a strong message to the country’s administration. But a call to Iran revealed a different story. Iran was crushed by half a dozen goals by England. The football lovers of the country should be saddened by such a shameful loss. But the people of the country are very happy with this rate. They say that the footballers did ‘drama’ without singing the national anthem.

It should be surprising to hear that the people of the country are rejoicing and ecstatic after hearing the news of the disaster of the national team on the world football stage. But what Iranian football player Milad Sheykhi Soleimani (Milad Sheykhi Soleimani) told Digital News Daily from the city of Ezeh must be surprising. It is to be noted that last week gunmen opened fire in the market of EJ city. Five people died. Iranian defender Milad, who played for Dhaka Abahani against Mohun Bagan, says, “The people of the country are very happy because Iran lost to England yesterday. Because the footballers of the national team did not support the anti-hijab movement at all. Did not stand by people. Chasmeera bowed before the president of Iran for personal gain and privilege. Not singing the national anthem in the first match in Qatar was a drama.”

It should be noted that before going to Qatar on November 14, Chesmi and Taremira met with Iranian President Ibrahim Raisi. The Iranian national team’s defensive midfielder Rouzbe Chasmi bows down in front of Raisi in the picture. And after this picture was published in the media, there was a great stir throughout the country. The common people of the country continue to criticize the footballers. Public anger began to accumulate against the football team. Reaction of the common people, the footballers of the national team surrendered without standing by the people of the country. This injustice cannot be accepted. Milad says, “When the whole country is burning with revolution, the footballers did not spend a word. Not only Chesmi, the entire team has bowed before the administration.”

Iran is seething with anger over the death of young Mahsa Amini by Niti police. Thousands of ordinary people are protesting on the streets. Highlighting the current situation of the country, he said, “Protests are taking place in almost all the cities of the country. It is becoming difficult for the administration to handle the situation. The police and government forces, the Republican Guard, are firing directly at the protesters. Women and children are not spared. Many are fighting back with guns in Ijeh city. But the administration is hiding this information. People don’t want this government.”

Milad also said that protests are also going on in his city. Police brutality continues. But the people of that city are not slaves to surrender. They continue to protest. Milad says, “Like me, the people of my town are mentally strong. We will not bow to any pressure. This protest will continue.”

No matter what Milad says, Chesmi and Alirezad may face severe punishment if they return home. Many think that like many Iranian citizens, they can also seek refugee status in America or Europe.

The whole world is praising the work of Iran’s national team. But the accusations made by the people of the country against the national football team show that the political situation in Iran is very complicated. The politics of fear is going on there.