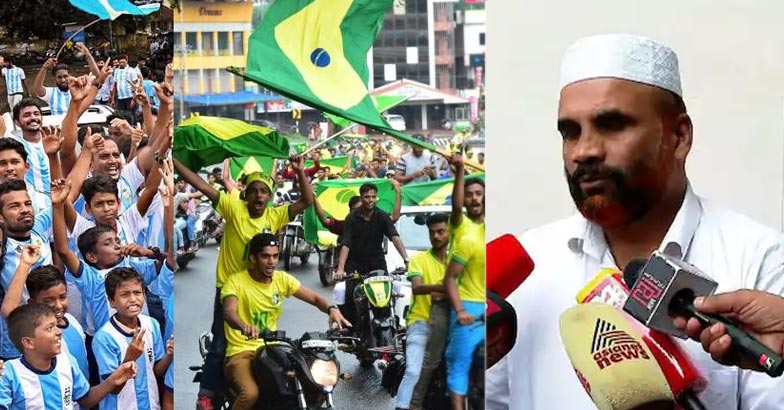 Kozhikode: Samasta State Secretary Nasser Faizi has come forward to explain more about the controversial message that football should not become an intoxicant and star worship should not cross the line. He also clarified that this is a statement given only to believers who come to the mosque.

Only the believers who come to the church were given the sermon notes. Instead of seeing the game in the sportsman’s spirit, he is feverishly resorting to star worship and debauchery. It should be avoided. There is a limit to everything in Islam. Islam does not approve of spending wealth without it. Unlike other countries, host country Qatar has restricted alcohol and sex. The restriction is based on religious views.

You have the freedom to love your favorite team and stars. It is their choice. Nasser Faizi explained that it is not right to spend lakhs of rupees on worship and to raise huge cutouts in cities and even villages and focus only on it.

Read Also: Carrying the flag of cruel Portugal and anti-Islamic countries is not the right way; With the start of the World Cup, the prayers decreased; Don’t get drunk all the time

Prayers should be offered five times a day in mosques. Irrespective of the prayer time, it is disturbing even that. The believers were only made aware that they should look at it in a sportsman’s spirit in a way that does not prevent prayer and should not spend excessive wealth and move forward without harming their interests. It is only for believers who come to church. He said that it should not be seen as a statement or an intervention.

Portugal was the first country to invade the country. It is said that it is not right to idolize even such countries and emulate their stars beyond sportsman spirit. It’s not anti-Portugal or a fan of Argentina or France. Not just targeting Portugal. He clarified that even Portugal was said figuratively.

Worshiping the stars should not be the same as worshiping God. Political leaders, movie stars and sports stars should not be worshipped. Let’s love within the bounds of faith. Even his own baby’s name comes in front of Messi’s cutout and he becomes star worshiped by naming him Messi for Messi’s favor.

Bringing the baby right after birth in front of the biggest cutout in town and naming it to seek Messi’s favor is not a comfortable practice. It is an Islamic thing not to go to sleep. The body gets tired and affects not only worship but also studies. Those who watch the game should pay attention to the body and worship. Nasr Faizi’s explanation is that the believer has authority to say that nothing should be disturbed.