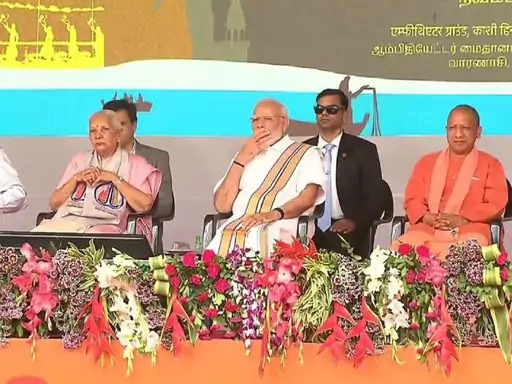 The Wall Bureau: The month-long Kashi-Tamil Sangam festival has started in Varanasi from today. Prime Minister Narendra Modi inaugurated this festival today. This festival has been organized on his wish. Discussions on the ancient links of Tamilnadu and South India with various places in North India including Varanasi will continue for a month at the Prime Minister’s Parliamentary Centre. There will be practice on spiritual and religious communication, reception of meritorious people, cultural programs etc.

Prime Minister reached Varanasi from Arunachal today afternoon. Everyone present was surprised to see the Prime Minister coming down from the plane at Babatpur Airport in Varanasi. The Prime Minister is wearing a shirt-lungi. A towel was also worn as part of the southern dress. Governor Anandiben Patel and Chief Minister Yogi Adityanath were present to welcome him at the airport. After that he reached the helipad of Banaras Hindu University in an army copter. As the Prime Minister’s convoy exited the airport, the crowd welcomed ‘Banakkam Kashi’ (Welcome to Kashi in Tamil) and Har Har Mahadev.

He inaugurated the month-long Kashi-Tamil Sangam at the amphitheater grounds of BHU there. Said Tamilnadu and North India, both Shivamaya and Shaktimaya. Said, ‘Welcome to Tamil Nadu everyone in my Kashi.’

The Prime Minister felicitated nine Saiva Mahantas of Tamil Nadu monasteries and temples on the stage. He prayed for their blessings. Published the book ‘Thirukkural’, a religious book on Kashi-Tamil culture, written in Tamil. The Prime Minister is scheduled to spend some time with the Tamil students of BHAU.

According to a section of the political circles, political figures are working behind the mega event of Kashi-Tamil Sangam initiated by Modi. The BJP has not been able to form a government anywhere in the south except Karnataka. In the remaining four southern states of Kerala, Tamil Nadu, Telangana and Andhra Pradesh, the BJP is now not a major force. Although the influence of RSS is not less in the states. Modi-Amit Shah continue to experiment with various strategies to conquer the South.

The DMK and AIADMK have been in power since 1967 in Tamil Nadu in particular. But K Karunanidhi and J Jayalalitha, who became icons in both the parties respectively, have passed away. Jayalalitha’s current leadership crisis and factionalism plague AIADMK.

On the other hand, MK Stalin was DMK’s guardian for long but could not wield the same influence as Baba Karunanidhi. The current leaders of both the parties do not have the passion that the Tamil public used to have around Karunanidhi and Jayalalitha. Even the saffron camp, including the BJP, lacks a face in the leadership.

In this situation, the Modi-Shah duo has started a different kind of experiment with Tamil Nadu after Karnataka in the Deccan conquest. The duo’s weapon to free the two states from the influence of regional parties is to evoke the Tamil links of religion and spirituality with Uttara, the hotbed of Hindutva politics. To that end, Prime Minister Venkat Ramana Ghanpati, a Tamil saint, has been made a member of the Kashi-Vishwanath Temple Trust in Varanasi. Beyond Tamil Nadu, Tamil language, literature and culture have a greater influence in the south.

Uttar Pradesh Chief Minister Yogi said while inaugurating the Kashi-Tamil Sangam event earlier, it is believed that Tamil and Sanskrit were the two languages ​​that emerged from Lord Shiva’s mouth. The Tamil Sangam event will strengthen the cultural bond between North and South by guests from Tamil Nadu.

This event will be held till December 16. 75 stalls of products that act as a bridge between South and North India through agriculture, culture, literature, music, food, handlooms and handicrafts, folk art are provided in the festival premises.

Venkat Ramana Ghanpati is the first person of Tamil origin to be appointed by the Prime Minister as a trustee of the Sri Kashi Vishwanath Temple Trust. He said that Prime Minister Narendra Modi organized this event for the first time. People of Tamilnadu who come here are also very happy due to this, it is the confluence of Ganga and Kaveri. Through this there will be exchange of knowledge, trade and culture of Kashi and Tamil Nadu.

Elon Musk lost 13 kg of weight, took Ozempik, what is this thing?