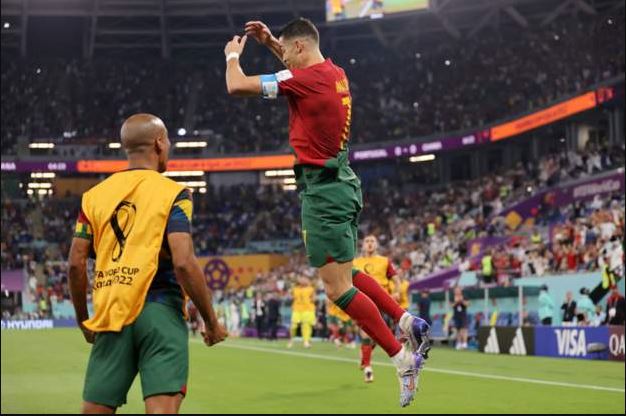 Dulal De, Doha: His arch-rival Lionel Messi lost the first match. Everyone was waiting to see what he did. Cristiano Ronaldo came, saw and conquered. He scored from the penalty. He became the first footballer on this planet to score in five World Cups. The impossible hunger to score was shown in his game. Ghanaian footballers are physically strong but Ronaldo tested them till 86 minutes. Off the ball movement caught the eye again and again. Who will say, he is in the twilight of his career. In the first match, Ronaldo explained that he had come to the last World Cup in Mata. He also increased the pressure on his arch rival. Although the two superstars are not in the same group. But wherever Messi and Ronaldo play in the world, the competition will continue. Judging from the perspective of the first match, Ronaldo left Messi far behind.

Qatar was busy with Cristiano Ronaldo. The Portuguese star has been at the center of controversy since the World Cup’s Dunduvi Bazar. He opened his mouth against Manchester United in an interview. He held an explosive press conference even after stepping into the queue. These are all off-field events. The whole world was watching how Ronaldo played inside the field. CR Seven could have scored within ten minutes of the game against Ghana. The ball goes to Ronaldo from Ghana’s miss pass. But he could not control the ball as the first touch was too much. The Ghanaian goalkeeper smelled danger and came forward. Ghana’s goalkeeper Lawrence did not let Ronaldo score in Shei Yatra.

Thirty minutes into the game, Ronaldo took the defender of Ghana and scored a goal. But the referee whistled for a foul on that journey. Ronaldo has adopted illegal means, the referee canceled the goal on this pretext. But Ronaldo took the penalty in the second half. Ronaldo was brought down inside the Ghanaian penalty box. The referee gave a penalty in favor of Portugal. Ghanaian footballers protested the referee’s decision. “I think Ronaldo dived,” wrote former England defender Matthew Upson on BBC Live Match. Whatever it is, the penalty spot is the world’s most mysterious table. No one knows how many stars have lost their way in this series. But Ronaldo is not a slave to losing his way. His powerful shot from the penalty spot went into the Ghanaian net. With this goal, Ronaldo set a precedent in the history of the World Cup. The Portuguese star became the first man to score in five World Cups. Qatar is Ronaldo’s fifth World Cup. This is probably his last World Cup. Football lovers are hoping that he will finish in the last match.

But Portugal could not keep the goal for long. Ronaldo scored the goal from the penalty in the 65th minute. Ghana equalized in the 73rd minute. The goal comes from the feet of Andre Ayew. Andre Ayew is the son of Ghanaian legend Abedi Pele. Andre Ayew took advantage of the weakness of the Portuguese defense to score. Ayew was taken off after scoring the goal. Joao Felix gave Portugal the lead five minutes after Ghana equalised. Andre Ayew did not sit on the reserve bench then. He stood and saw Joao Felix scoring a goal. Two minutes later, Portugal scored again. Portugal increased the gap by catching the ball from a missed pass by Ghana. Rafael scored the goal. Ronaldo, Joao Felix were taken off in the 87th minute. Then Osman Bukari reduced the gap for Ghana. There was no shortage of spice in the five-goal Portugal-Ghana match. But it was Cristiano Ronaldo’s Portugal who had the last laugh.