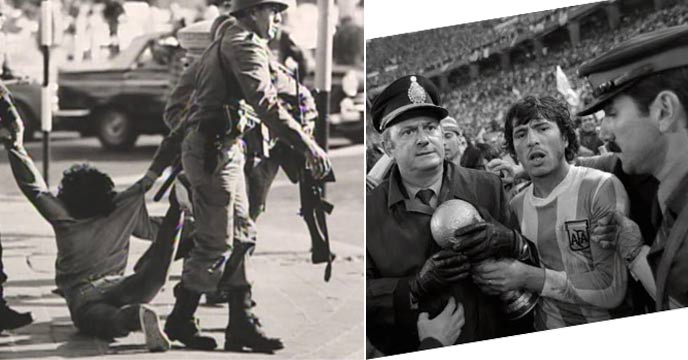 The bloody chapter of Argentina Civil War 1978 between the Military Junta and pro-democracy is the black chapter of world football.

Talk talk talk talk…soon the sound of the night
Are you home Diego?
Is Ella home?
Is Armando home?
Henrietta is home?

In the list of thousands of such names, most of them are ‘unintended’ – ‘dead’. These names are common in Argentina. Four decades later, the young Argentines of that day, supporters of the country’s Communist Party and believers in democratic doctrines, who were carried away during the terrible nights.

Dogs lying with their tails curled up and down the streets of Buenos Aires were silent witnesses to the mass abductions and murders. ‘Liberte… Viva Argentina,’ cried communist activist Ila in a firm voice as the barrel of a silenced revolver in the hands of a blue-and-black army officer touched death above his head. (Welcome Freedom…Victory Argentina)

Ella, Diego, Armando, Henrietta are all missing-dead thousands of names. Screams from the concentration camp mingled with the salty Atlantic air. A mother waits long for her child’s body to be taken from the streets of Buenos Aires. Amidst the frenzy of World Cup football, he is also a terrifying sight. Moments that have been immortalized in news and pictures sent by international news agencies. When the World Cup football comes, the names of thousands of democratic rebels are mixed with football frenzy in Argentina’s homes.

Argentina in 1978. The South American country was under military rule. The struggle to establish democracy is going on against him. The US has tacit support. As a result, the demand to host the World Cup in Argentina is strong. Who will veto the World Cup during the civil war? Meanwhile, Argentina has been identified as the host country of the World Cup since 1966.

The conflict between the military regime and Argentina’s communist and leftist organizations was intense. Young men and women were searched in the dark from house to house in Buenos Aires. President Videla is being criticized around the world. He wanted to cover everything in the World Cup. He also gave the message that he wants the World Cup.

FIFA trembles at Videla’s rant. Argentina’s victory is coming in one match after another. Finally the day came, June 21, 1978. The Argentina-Peru match is tainted in the history of the World Cup. The governments of the two countries decide that Argentina will win the match. Peru conceded the match to Argentina on the condition of receiving 50 million pounds and granting 13 prisoners the honor of political prisoners. Argentina reached the final.

Holland (Netherlands) face Argentina in the final. Argentina won 3-1 in a hard-fought game. After that on Ganjowa Rajpath. He is also dressed. There is cheering at the point of gun.

The Navy School of Mechanics, a prison camp for the military government, was just a mile away from the stadium where the games were played at River Plate in Buenos Aires. British photographer Wright Thompson went to photograph the World Cup. He wrote in the book ‘Dirty War’ that when the Argentina match was going on in the stadium, cries could be heard from the torture cell.

This is a terrible black and white side of the blue and white Argentina football jersey. In 1983, the dictatorial Videla regime ended. Democracy returned to this country after the bloody mass protests.