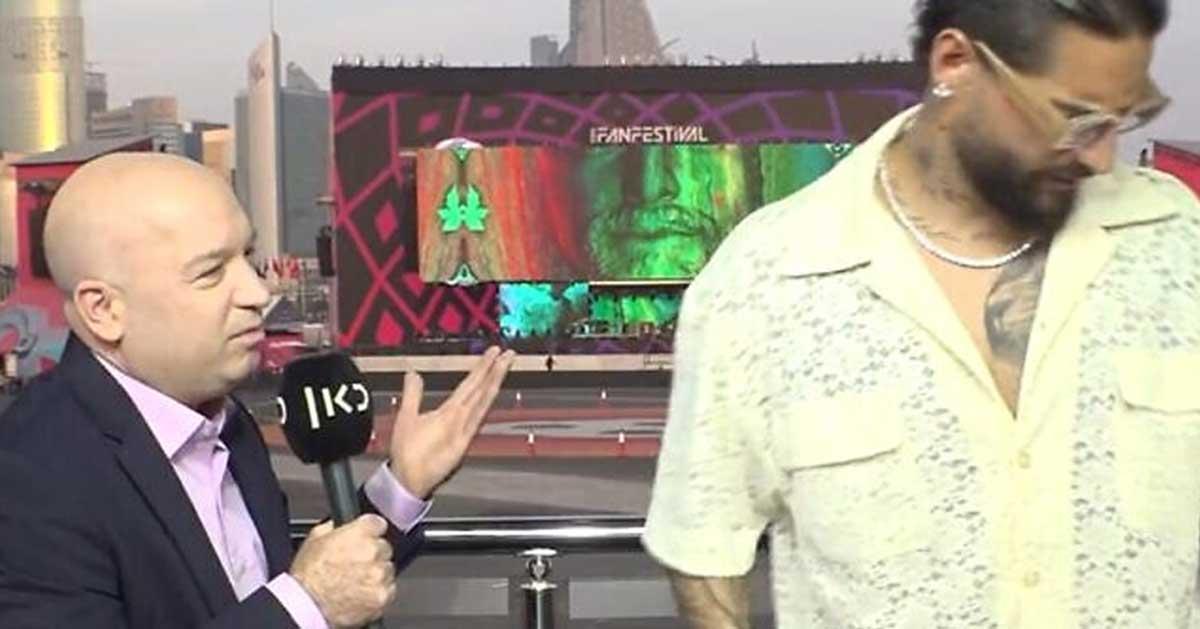 
‘I can’t fix this’; Israeli anchor repeatedly talks about human rights in Qatar; The world cup singer is gone

Doha: Colombian singer Maluma walked out of an interview to protest the Israeli presenter’s continuous questions about human rights in Qatar.

The singer boycotted an interview with Israeli public broadcaster Cannes in Qatar.

Maluma is one of the singers of Tukoh Taka, the Qatar World Cup anthem. Nicki Minaj, Miriam Faires and Maluma have sung the latest song from the FIFA soundtrack. The interview was related to this.

But the presenter kept asking Maluma about human rights in Qatar and forcing him to answer. Maluma left there after this.

Shakira and Dua Lipa refused to attend the Qatar World Cup due to their poor record on human rights issues. But Maluma participates in this.

Don’t people naturally think that you don’t have any problem with the human rights violations that are happening here’, asked the anchor Moav Vardi (Moav Vardi).

“But that is not something I can solve. I am here to enjoy my life, to enjoy football and to enjoy its party,” Maluma replied to the host.

With this, the presenter asked again, ‘Being a part of the World Cup, your presence is to help the Qatari government, which is whitewashing the human rights issues here, and people will ask about this anyway.’

Maluma asked, ‘Do I have to answer this?’ He then boycotted the interview and left. In the video, Maluma can be heard telling the interviewer, ‘You’re rude’.

‘This will be what people think and say’ the presenter says before each question.

At the same time, protests are intensifying from various quarters against the Western media reporting on the campaign model against Qatar, the first Arab country to host the World Cup.

Piers Morgan, a British-American television presenter, responded to the allegations against Qatar in a podcast show called The News Agents.

Piers Morgan said there was a double standard in the current protests against Qatar’s criminalization of homosexuality. He also said that if other countries are measured by the same yardstick of protests and criticisms against Qatar, then no country will be eligible to host the World Cup.

“These sportswashing debates going on now are completely hypocritical. Homosexuality is a criminal offense in eight of the 32 countries competing for the World Cup. If you turn against Qatar in the name of homosexuality, you should do the same with the other seven countries.

If you are thinking of changing the venue to America, there are even more cruel and regressive laws. Abortion is an example. The same is true in the UK.

We (the US) illegally invaded Iraq. The terrorism of ISIS also started. That terrorism has continued for more than 20 years. Do we have any qualification to be a World Cup venue,” said Piers Morgan.

The news and criticism given by the Western media against Qatar is full of double standard and hypocrisy.
FIFA President Gianni Infantino also said.

“It’s a double whammy. I don’t have much advice to give you about life. But 100% injustice is happening in these criticisms.

There have been protests from Qatar and other parts of the world against Qatar’s legal system, which criminalizes homosexuality.

Organizations including Human Rights Watch had reported about many human rights violations and labor exploitations in Qatar as part of preparing facilities for the World Cup. But many people pointed out that anti-Muslim and racism is behind the campaign of European teams and Western media against Qatar by providing fake news.