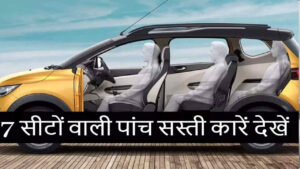 New Delhi: Best 7-Seater Cars in Low Price. Everyone has a dream to buy a car. Due to which people work hard day and night and deposit lakhs of rupees, let us tell you that people have different purposes to buy a car, due to which they keep searching for a car for themselves. So in the same market, more than one budget is available to buy cars. There are many people who prefer to buy a car for a large family. that we have brought here for you, Information about 7-seater cars remains the first choice of people in two markets.

Actually let us tell you that here we have prepared a list of cars like 2022 Maruti Eco, Renault Triber and Maruti Ertiga which come in low price but are good in space and mileage. So let’s tell you about them.

in low price Maruti is selling more than one cool car, in which the company’s The new Maruti Eeco is offered by the company in both 5 seater and 7 seater models. Recently launched in the market, the company has included reclining front seats, cabin air filter, dome lamps and new battery saving function in the Maruti Suzuki Eeco.

The new Maruti Eeco has been introduced by the company with new refreshed interior and advanced features. The K-Series Dual-Jet VVT petrol engine of 1.2 liters capacity has been used in this car, which generates power of 80.76 PS and torque of 104.4 Nm. The company claims that this car gives a mileage of up to 19.71 kilometers per liter.

Company first car in competition 2022 Maruti Eeco has been improved a lot. In which improving safety, 11 safety features have been included in it. In which features like illuminated hazard lights, dual airbags, engine immobilizer, anti-lock braking system (ABS) with electronic brakeforce distribution (EBD), child lock, sliding doors, reverse parking sensors have been included. his The starting price has been fixed at Rs 5.13 lakh (ex-showroom, Delhi).

Renault Triber is a good option in terms of 7 seater car, in which the company has given more than one feature. Its price ranges from Rs 5.92 lakh to Rs 8.51 lakh. In this car, the company has used a 1-litre capacity naturally aspirated, 3 cylinder petrol engine which generates 72PS of power and 96Nm of torque. This engine is equipped with 5-speed manual and automatic transmission gearbox. Apart from this, this car also comes with a 1-liter turbocharged petrol engine, whose engine generates power of 100PS. The company claims that this car gives a mileage of up to 19 kilometers per liter.

this car It gets a 7-seat configuration with detachable seats. Although when you use the detachable seat in the third row, its boot space reduces to 85 liters while removing this seat gives you a full 625 liters of boot space.

As features, features such as Renault Triber adjustable driving seat, projector headlamps, LED turn indicators, music and phone controls on the steering wheel have been given.

Maruti Suzuki Ertiga is a special choice in the MPV segment. Its price ranges from Rs 8.35 lakh to Rs 12.79 lakh. The company claims that its petrol variant gives a mileage of about 20 km and in CNG mode, this car has a mileage of up to 26.11 km per kg.

Talking about the same engine, the company has used a 1.5-litre petrol engine in this car, which generates 103PS of power and 137Nm of torque. This engine is equipped with 5-speed manual and 6-speed torque converter gearbox. However, the power output of the CNG variant drops to 88PS.

Normally, you get 209 liters of boot space in this car that comes with a total of 7 seats, but after folding its third row (third row) seat, the boot space increases to 550 liters.

Mahindra Bolero – Price starts from Rs 9.53 lakh
If you want to buy an affordable 7 seater car in the SUV segment, then Mahindra Bolero is also a good option for you, with prices starting at Rs 9.53 Lakh. The mileage of this SUV with 1498 cc engine is 16 kilometers per liter.

let you know Mahindra’s The car portfolio is huge. In which there is also Mahindra Bolero Neo, whose price ranges from Rs 9.48 lakh to Rs 11.99 lakh. The mileage of this 7 seater car is up to 17.29 kmpl.

The post This is the Best 7-Seater Cars in the market at the cheapest price, the hassle of space and mileage will end by buying appeared first on Times Bull,