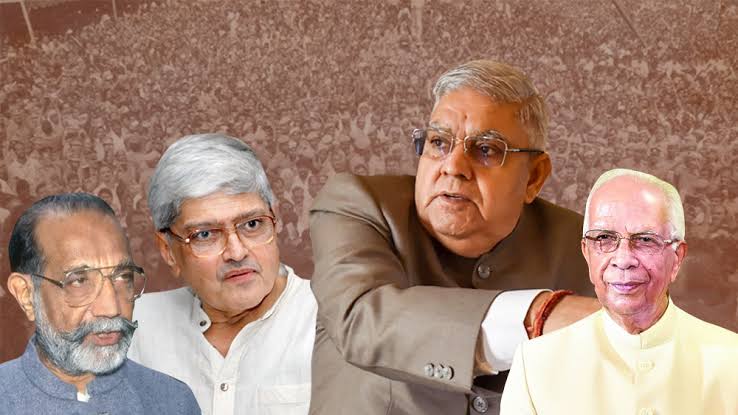 The Wall Bureau: Union Home Minister Amit Shah called Chief Minister Mamata Banerjee shortly before the decision to make former bureaucrat CV Anand Bose the next governor of the state was officially announced. He told the Chief Minister that CV Anand Bose is going to be a permanent resident of the Raj Bhavan of Bengal.

According to the source, the Chief Minister heard everything and said in a slightly pleading tone, this time too you will decide the name and then inform me. In response, Amit Shah assured the Chief Minister that there will be no problem. Your working experience with Bose will be good.

Rashtrapati Bhavan announced Bose’s name after the Home Minister’s call. This is the difference between the appointment of Bose and the previous permanent governor Jagdeep Dhankar.

This time, not only the Chief Minister, nobody made any comments on behalf of the Trinamool on Thursday. The small news published in the party’s mouthpiece ‘Jago Bangla’ only mentions the identity of the future governor.

However, yesterday evening, the Chief Minister again reminded Amit Shah that it is a political courtesy to discuss with the state government before appointing the Governor.

Incidentally, the Center had a sharp conflict with the previous Left Front government on this issue. In the nineties, TV Rajeshwar was sent as the Governor by the Congress government at the Centre. Like Bose, he was a retired bureaucrat. He was an IPS officer. During his retirement he was the Director of Central Intelligence Agency IB. Before catching a flight to Delhi for Kolkata, the then Chief Minister Jyoti Bose was informed about Rajeshwar’s appointment. An angry Jyoti Babu said, ‘I heard that the person who is coming as the governor used to work in the police. Now retired. Probably, Delhi is sending him to spy on us.

However, the state government did not have much of a dispute with Rajeshwar. He used to plow the state. He gave various suggestions to the administration. But he did not roar like a rich man.

MK Narayanan also spent time in the Raj Bhavan of Bengal as a retired bureaucrat. He was also an IPS officer. Became National Security Adviser in Congress. Narayanan had the opportunity to work in both the left and present eras. Small disputes happened with him both times.

The Center has no constitutional responsibility to take the opinion of the State Government before appointing the Governor. However, the Justice Sarkaria and Justice Poonchi commission has recommended that the Center send at least three names to the Chief Minister and take his opinion.

Just as there have been many conflicts with past Left governments over the appointment of governors and their working, there have also been instances of working together. Former Governor Biren Jay Shah was the All India Vice President of the BJP. Industrialist Shah was also a friend of Jyoti Babu. When Jyoti Babu went to Delhi, Atal Bihari Vajpayee, Lalkrishna Advani would join Shah’s house. Vajpayee sent Shah as the Governor of Bengal when he was Prime Minister. Jyoti Babu welcomed him at the airport.

Again the opposite was experienced with Gopalkrishna Gandhi. This former diplomat was charmed by Jyoti Babu. Buddhadev Bhattacharya made him the governor. But his conflict with the state came to a head when the police opened fire in a dispute over land acquisition in Nandigram. However, Chief Minister Buddhadev Bhattacharya never spent a single word against the Governor.