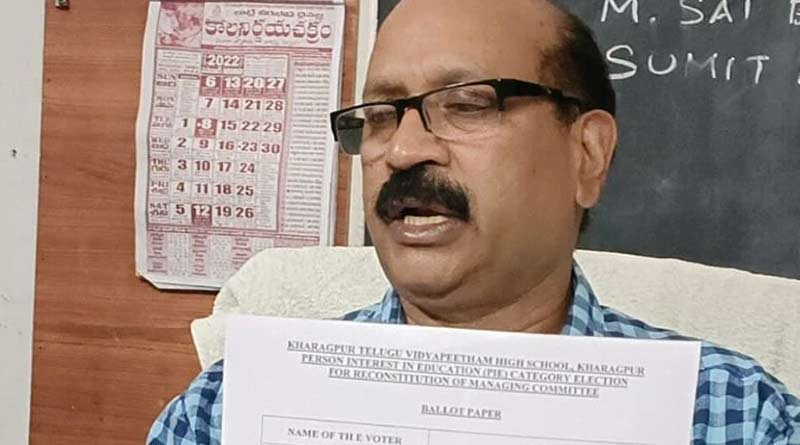 Ashupratim Pal, Kharagpur: Allegations of looting of ballot papers in PIE elections in schools are against the followers of a Trinamool Councilor of Kharagpur Municipality. However, the councilor denied the incident. There is a huge uproar in Kharagpur over the incident. Two days after the incident, the headmaster of the school is still in a state of panic. He cried while talking about the incident.

On Tuesday evening, there was an election for the post of PIE at the Telugu Vidyapithm on Ward No. 16, Malanch Road, Kharagpur. Enraged after the defeat of Nirvana, the councilor of ward number 15 of the municipality Banta Muralidhar Rao looted the ballot paper and ransacked it. The headmaster of the school alleged that the entire incident took place in the presence and direct support of Councilor and Trinamool Kharagpur City Committee President Surya Prakash Rao. It is learned that one person was supposed to be nominated for the post of PIE in this school as per the rules. Accordingly former teacher M Kalidas was nominated by the school authorities. The teacher was in this position for the last three years. The school authorities nominated him again. Councilor Banta Muralidhar Rao of Ward No. 15 came to know about the matter. He went to the school on Saturday and proposed his name for the post. As a result, elections became inevitable. That election was held on Tuesday. There were only 12 voters. Six of them were parent representatives. There were three teacher representatives. One was a non-teaching staff. The head teacher and a government nominated member were as voters. Total 12 voters. All of them exercised their right to vote, but the headmaster’s ballot paper was kept secretly in an envelope as per the rules. If there is only a tie, then the rule is to open the ballot paper of the headmaster.

Although headmaster K Sriram Chandramurthy said, he was forced to write this notice and hang it. Meanwhile Rajat Kumar Pal, Avar School Inspector of Kharagpur West Chakra, who had come to see the election work, left the school after seeing this mess. However, the head teacher of this school filed a written complaint with the Kharagpur Town police station on Tuesday night. Police said a complaint has been lodged. The incident is being investigated. Meanwhile, BJP’s All India Vice President and MP Dilip Ghosh said on Wednesday, “These are examples. How is the vote going? And the practice of how to vote is going on. It is known that the Trinamool cannot win without loot.” But accused councilor Banta Muralidhar Rao said, “This election is not valid. There is no basis. No more ballot papers were looted. All false allegations are being made.” Trinamool’s Kharagpur city president Surya Prakash Rao did not pick up the phone despite repeated calls in this regard. However, Trinamool District Coordinator and MLA Ajit Maiti said, “We have to inquire about the matter.” Meanwhile, since the incident on Tuesday, from the headmaster to the rest of the teachers of the Telugu Vidyapith, they are in a state of panic.