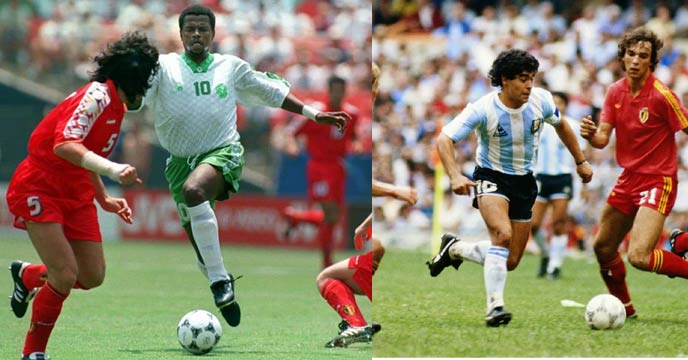 The name Saeed Al Owairan shines in the list of magic goalscorers in football. Jailkhata a moon! For which the eternal enemies Arab and Iran together said – Marhaba…Marhaba. (thank you)

Prasenjit Chowdhury: The market is crowded. The people of Riyadh are intoxicated by the aroma of Iftar. He is savoring the large pieces of dates in his mouth. After that, strong black coffee and roasts are really good uses. The policy police are here. Suddenly their eyes narrowed. What’s going on there!

Around the table there are some rioters. Foreign women and Arab nationals are intoxicated with good stories. The officer proceeded silently. The officer’s narrowed eyes rose to his forehead. Oh well this matter! Wait, I’m having fun. Niti police officers with a team appeared in front of the table with such an attitude.
-Wayran you too!
– No, I mean, yes… I sat with them. Saudi’s Chand Saeed Al Wairan started sweating. Throat was dry. The small wine glasses spread on the table are telling the ‘crime’ of Wairan.
This is a terrible incident in the month of Ramadan. Seeing Wairan sweating in fear, who would say that Saudi Arabia and the whole Arab world would come forward to give their lives for this man. On the cover of world-renowned sports magazines, Maradona and Wyran’s goals have been compared again and again – Wyrandona!

If you break the religious law, you have to appear before Jahlad in the famous Chop Chop Square in Saudi Arabia. According to the fault, someone’s hand, someone’s head is fixed for punishment. The rest is easily guessed. But Wairan was jailed. Even after going to jail in 1996, Wairan is a hero. This heroic glimpse was born in 1994 on the field of the USA Football World Cup. It was an incredible moment.

Fifa review, rare moment of Maradona smiling while watching the video footage repeatedly, analysis of world famous sports magazine-magazine repeatedly counted 1 2 3 4 …Go O L L L L! In Saudi Arabia, the number 10 of the green-white jersey, Wairan, is advancing through the defense of opponents Belgium. Belgian defenders coming to cut the ball are falling like cut banana trees. After passing four people in a row, the golden kick went to the goal post of Belgium like a hunter jaguar!

The referee’s whistle blew. Thousands of viewers were shocked. This is incredible. After a few seconds of bewilderment, the excitement spread around the world. Commentator said ‘unbelievable’!

In this World Cup match in 1994, Saudi Arabia (Saudi Arabia) defeated its strong opponent (Belgium) by 1-0 goals. Aladdin’s monster-like goalscorer Wairan’s defense-breaking run has been compared to Maradona’s famous goal in the 1986 World Cup in Mexico. Argentina’s opponent in that match was Belgium. Maradona broke their defense alone.

The World Cup football season means a rush of events. The game is played not only on the field, but also outside the field. As usual, the game started with Saudi footballer Saeed Al Wairan. Tabar Tabar ‘Football Catcher’ jots down new target-wires in their notebooks. A football star was born in the United States, which is actually the moon of the Arab world. Asia’s best footballer.

On that day, Saudi Arabia was shaking with emotion in the name of ‘Wairandona’. Iran, the arch-enemy of Arabia, was shaking with emotion. Qatar, Kuwait, Oman, Amirshahi, Egypt, Morocco, Palestine, Bahrain, Tunisia, Turkey, Syria across the Red Sea, the Gulf of Aden, the Arabian Sea, the only words of billions of people watching TV screens around the world can this be true! This is incredible.

New York Times In an interview given to K, Wairan said, I have seen the video of scoring a goal a thousand times. I can’t believe what I did. Sounds like a great dream. That dream any footballer would love to have. And please don’t draw comparisons with Diego. he-he

I tried to keep my mind strong while I was in jail. There was more to do for the Saudi national team. A mistake was made. Nothing else. Later said Wairan.

He returned from prison. But there was no more glimpse. However, Saeed Al Wairan has remained right next to Maradona in the list of one of the best magical goalscorers in the world.